Emerging from obscurity into a world-class young gun, Son Heung-min is seeking to have his transformed presence felt in Lebanon.

The Hamburg star wasn’t feared by the Mediterranean team two years ago. He doesn’t want that to happen when Korea plays a rematch that could determine its World Cup fate - and possibly his value in Europe too.

“The previous match against Lebanon is full of not-so-good memories, but it will be different this time,” Son said Monday.

Son and other Korean national football team players left for Dubai yesterday ahead of a crucial World Cup qualifier in Beirut slated for Wednesday morning in Korean time. Choi’s squad will train in Dubai for three days, then leave for Lebanon on Saturday. It will be the first time that Korea plays at Lebanon since Nov. 15, 2011, when the two teams faced each other at the third Asian qualifying round for the 2014 World Cup.

Son, then a second-year Bundesliga striker, made his first start in a Taegeuk Warriors uniform during the match, but failed to impress in Korea’s 2-1 loss.

“I was only 19 years old two years ago in Lebanon,” Son said. “I felt pressure to do well, and that made me really nervous. “My foot got slow and things did not play out as I wanted. The team lost, and I also did not show a good performance.” 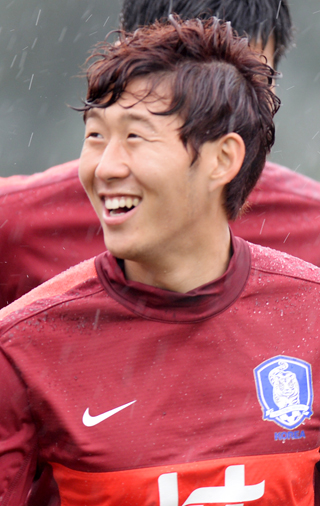 His play in Lebanon fell far short of foreshadowing his success in Bundesliga - he struck 12 times in Germany this season - and national football coach Cho Kwang-rae, and his successor, Choi Kang-hee, called him up intermittently. Son’s confidence shrank and his goal drought continued through his 12th match for Korea in Iran in October. He was sent in as a substitute but had to watch as Korea lost to a 10-man Iran team, 1-0.

Finally, he grabbed a chance to impress the national team members when he scored the winner in a 2-1 match against Qatar in March, which ended Korea’s four-game winless streak. It was Son’s second goal for Korea. His first came in Korea’s 4-1 victory over India during an Asian Cup game in January 2011.

Korea, the runner-up in Group A, is only three points clear of Iran and Qatar and a loss to Lebanon could put it at risk of losing its eighth consecutive berth to the World Cup.

Another stellar performance for Korea will also help raise Son’s value. According to BZ Berlin, a German media outlet, signing Son will require up to 13 million euros ($17 million). In Bundesliga, Dortmund is showing interest in him, as is Leverkusen. He is also tied to rumors linking him to Liverpool and Tottenham in the English Premier League. “As a striker, I feel pressure in every game to score a goal, but I have studied about the opponents of the final qualifying rounds, so I think I could score,” Son said.

After the Lebanon match, Korea will host Uzbekistan on June 11 and Iran on June 18 to wrap up the qualifying campaign.

It is unclear, however, whether Son will be able to play. Coach Choi did not deny a possibility of employing Son along with fixture Lee Dong-gook on the front line against Lebanon, but he cautioned against speculation. “As we have to play a winning game, I need to think thoroughly of how to form attack combinations,” Choi said.