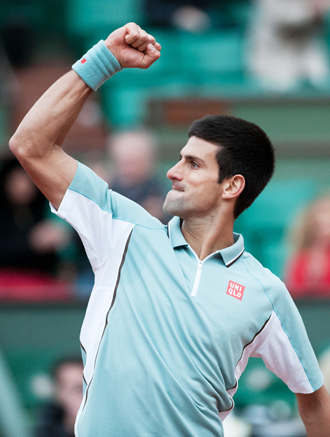 Novak Djokovic of Serbia celebrates during his first-round match against David Goffin of Belgium at the French Open, Tuesday. [XINHUA/NEWSIS]

PARIS - Novak Djokovic spent the better part of a rainy Tuesday at the French Open wondering when ? and even whether ? he would wind up playing his first-round match at the only Grand Slam tournament he’s yet to win.

Unlike Wimbledon and the Australian Open, Roland Garros does not have a roof at any court.

Unlike the U.S. Open, though, at least there is a definitive timeline to build one.

Djokovic is thrilled about that forthcoming addition in Paris, even if it won’t come until 2018. He also can’t wait for them to install artificial lights at the French Open, which is supposed to happen sooner. Both of those improvements would have contributed to a more stress-free evening for the man ranked and seeded No. 1, who slipped and slid his way along the red clay to a 7-6 (5), 6-4, 7-5 victory over David Goffin in the first round.

“It was a difficult day, because we have been waiting for hours and hours. I think I warmed up five or six times today,” Djokovic said. “In these conditions .?.?. you need to adjust your game and tactics, because it’s quite different than comparing to the conditions when it’s dry and sunny.”

Even though his match against the 58th-ranked Goffin, a Belgian who was one of the revelations at Roland Garros a year ago, was the second to be played on Court Philippe Chatrier, they did not begin until after 6:30 p.m. They finished as light was fading shortly before 9 p.m.

“It was a long day,” Djokovic said.

At least he got to play.

All told, only 26 of 40 scheduled singles matches were completed, three were suspended in progress, and organizers wound up postponing 11 others entirely. AP