Jinju Medical Center to be completely shut down

Jinju Medical Center to be completely shut down 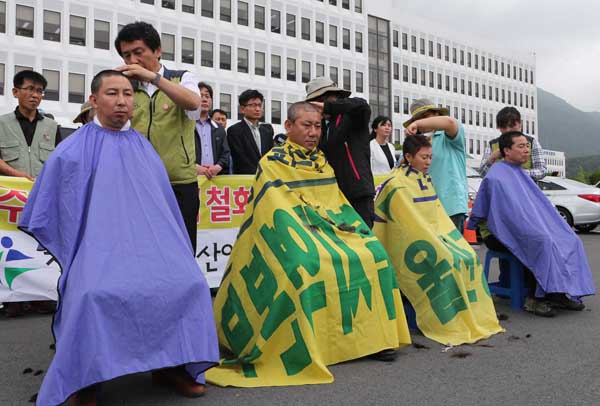 Members of the Korean Health & Medical Workers’ Union have their heads shaved in protest against the decision to shut down the Jinju Medical Center yesterday in front of the South Gyeongsang Provincial Government building. By Song Bong-geun

After 92 days of bickering and controversy surrounding the fate of the nation’s second-oldest public hospital, the South Gyeongsang Provincial Government yesterday announced the closure of Jinju Medical Center, citing an accumulated loss of 28 billion won ($24.72 billion) and an annual loss of 7 billion won incurred by the troubled medical institution.

“From having seen members of the Jinju center labor union only pursing their own interests, we have found no hope for the revival [of the medical center],” said Park Kwon-bum, acting head of the cash-strapped medical center, during a press briefing at the provincial government office yesterday.

“The operation [of Jinju Medical Center] will be shut starting from May 29 [yesterday].”

In a subsequent press briefing, South Gyeongsang Gov. Hong Joon-pyo, who has been at the forefront of the closure, repeated his previous remarks that Jinju Medical Center has been primarily run in the interest of its hard-line labor union, rather than for the patients.

With the announcement by the South Gyeongsang government, the 103-year-old medical center will be the first public hospital to be closed by a local government. The closure announcement came 92 days after the provincial government unveiled its plan to shut the money-losing public Jinju medical center on Feb. 26, stressing the accumulated losses amount to 28 billion won. The operation at the center has been suspended since April 3.

With the closure announcement, the provincial government laid off 70 remaining medical workers at the center and urged three remaining patients at the hospital to find other medical institutions.

Yesterday’s announcement immediately drew condemnation by the medical trade union and opposition political parties, including the Democratic Party. Eight DP lawmakers belonging to the National Assembly’s Health and Welfare Committee issued a statement yesterday in which they condemned the governor and demanded to hold a legislative hearing on Hong for his “unilateral decision.”

Shutting down the hospital has been part of Hong’s push to reform state-run organizations, particularly money-losing ones. Hong’s move is in line with the South Gyeongsang government’s plan to halve its 1.34 trillion won debt by 2017.

But the plan to close down the Jinju center has sparked strong backlash from local politicians and civic groups and spilled into a political fight. Opposition political parties have voiced that Jinju Medical Center represents the role of public medical institutions to provide medical care to the poor and the elderly.

Governor Hong, however, has long criticized the poorly managed center as a safe haven for the greedy labor union and cited the 28 billion won loss as the main reason for the closure.

With the closing of Jinju Medical Center, 33 other public medical centers nationwide could also suffer the same fate as the accumulated losses of the 34 medical centers, including the Jinju center, amounted to 514 billion won as of the end of 2011, prompting local governments to call on those badly performing centers for restructuring.

There are still a few steps remaining before the medical center is formally closed, with a bill pending at the South Gyeongsang Provincial Council. The bill on the closure will be put to a vote during an extraordinary session slated to begin on June 11 through 18. If passed, the Jinju Medical Center will undergo liquidation.