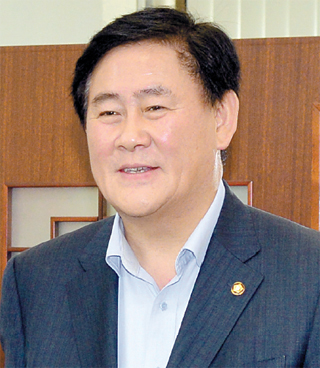 Choi Kyung-hwan, floor leader of the ruling Saenuri Party, yesterday expressed his opposition to those who would use economic democratization to divide the nation rather than promote prosperity for all.

“There have been attempts recently to use the economic democratization initiative for a political purpose,” Choi told a general meeting at the National Assembly.

Dividing the nation into parts for political purposes would only trigger economic confusion and create another victim, he said.

“The original purpose of economic democratization is co-prosperity, not schism,” Choi said.

The inventor of the term “economic democratization” is the Saenuri Party, and the ruling party has been leading efforts to form a public consensus on the topic since last year, he explained.

“This June, lawmakers will pass the bills to eliminate the Fair Trade Commission’s exclusive right to accuse businesses with the prosecutors and protect owners of affiliated stores from their headquarters’ abuse of power,” said Choi.

In April, lawmakers from the ruling and opposition parties agreed to reform the law on protecting contractors from unfair transactions with their clients that are mostly conglomerates.

The revision was part of the ruling party’s economic democratization drive.

Under the revised law, companies that cause financial damage to their smaller contractors will face compensation that is three times bigger than that amount. Choi added that his party will accelerate efforts to write bans on internal transactions within conglomerates and new cross-shareholding investments into law.

The floor leader, at the same time, criticized practices by conglomerates, including offshore tax evasion, and urged the government to penalize.

“There is no need for economic democratization rhetoric in what the conglomerates are doing now,” Choi said. “No sanctuary is allowed for such illegal practices by large businesses.”

Apart from government authorities including the National Tax Service, an independent nonprofit new organization Newstapa has revealed the names of the 245 possible offshore tax dodgers that included heads of conglomerates and a son of a former president.