As his forehand returns, Nadal rolls to easy win

As his forehand returns, Nadal rolls to easy win 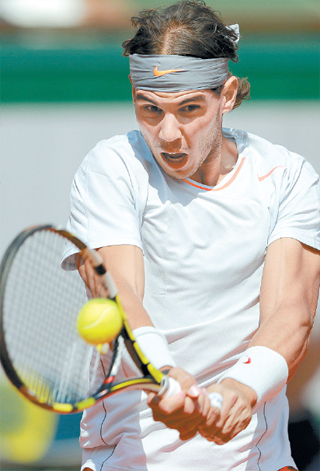 Rafael Nadal of Spain returns to Kei Nishikori of Japan during their men’s singles match at the French Open in Paris, Monday. [REUTERS/NEWSIS]

PARIS - All Rafael Nadal wanted for his 27th birthday at the French Open on Monday was his forehand back and he got his wish as the Spaniard’s most feared weapon demolished Japan’s Kei Nishikori and sent the defending champion into the quarterfinals.

The left-hander, bidding to become the first man to win one of the sport’s Grand Slams eight times, played his most impressive tennis of the tournament so far to claim a 6-4, 6-1, 6-2 victory.

Nadal had looked like cartoon character Popeye without his spinach as his forehand misfired in his three previous matches but it returned with a vengeance to give the 13th-seeded Nishikori little chance of making any impression.

“That’s the real thing,” said Nadal, who was presented with a huge birthday cake on court after completing his 56th victory at Roland Garros.

“I played much better today than the first three matches, no doubt about that. I started to have feelings with my forehand when I had a chance to hit it.

“I started to feel that I can hit the ball longer and having more confidence in every stroke.”

Nadal has built his glittering career around the forehand, a stroke that at its best strikes fear into opponents as good even as Roger Federer, but in his first two matches against Germany’s Daniel Brands and then Martin Klizan, it lacked its usual ferocity and depth.

A Sunday off, when he took to the practice courts to reboot his game, appeared to work wonders as this was more like the Nadal who has lost only one match at the claycourt Slam.

“I said the other day I needed to improve. Seriously, if you told me two days ago I will play like this today, I would have signed for that.”

The forehand will be a key factor in Nadal’s quarterfinal against Switzerland’s Stanislas Wawrinka, who hit nearly 100 winners, many with his lethal single-handed backhand, in a five-set victory over Richard Gasquet.

Nishikori, who also owns a single-handed backhand, often found himself pinned back and hopelessly out of position as Nadal’s forehand reared up way over his shoulder.

Nadal’s early performances here also raised doubts over his physical condition after a long, hard claycourt season so soon after returning from a seven-month break while his knee healed.

There was a real spring in his step on Monday, though.

“My movements were much more serene. I was more powerful when I was on the back foot,” he said.

“I arrived on the court in a better sort of condition and that’s why I was confident and calm.

“I knew that things were going to go very well and I went out on the court happy.”