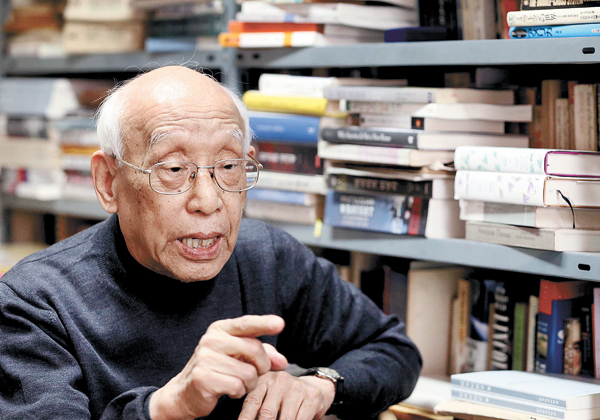 Prof. Lee Bo-hyung talks to the JoongAng Ilbo during an interview conducted in his study room in Mapo District, central Seoul. By Kim Sang-seon

Since stepping down from behind the classroom podium 24 years ago, the senior professor hasn’t stopped reading and writing.

Earlier this year, the historian of more than half a century published two books reflecting on his works published since the 1950s, titled “Wooam’s Stories.” Wooam is Professor Lee’s pen name.

In an interview with the JoongAng Ilbo, the lifelong scholar showed his humble personality by saying the two new books are “not that great” but are a collection of his work spanning 50 years of his career.

The fact that this recent publication was made possible due to a strong push from his readers tells a different story.

Born in 1924, Lee’s life followed along the turbulent years of the Korean modern history. While attending Yonhi College, the predecessor of Seoul’s Yonsei University, Lee was forcibly drafted into Japan’s Imperial Army during Japan’s colonial rule (1910-45) on the Korean Peninsula. After independence in 1945, Lee was sent to a POW camp in Manchuria, eastern China, and was later released.

After returning to Korea, Lee studied history at Seoul National University and became the first author to publish a book on North American history in Korean. After teaching at Hongik, Dongguk and Sogang universities, Professor Lee retired in 1989.

“After my retirement, I opened my personal library here 24 years ago and since then I have been reading books whenever possible. It has been such a blessing.”

Lee is known as Korea’s first historian to lay the foundation for an American history study in the country, but Lee’s comments on his past years as a historian during the interview was very humble.

“Don’t call me a historian, but a fervent reader into history,” asked the respected professor.

Looking back on more than half-a-century during which he has been a historian, Lee offered the definition of what it means to study history.

“The more I study history, the more convinced I am that there is no 100 percent objective history. But one thing in common shared by revered historians is that they did their utmost to view and interpret past events objectively,” said the retired professor.

“Any conduct by someone that has historical meaning has merits and demerits. And defining historical events entirely as right or wrong is not an appropriate approach to study history.”