Blasts in the face from exhausts are actually illegal

Blasts in the face from exhausts are actually illegal 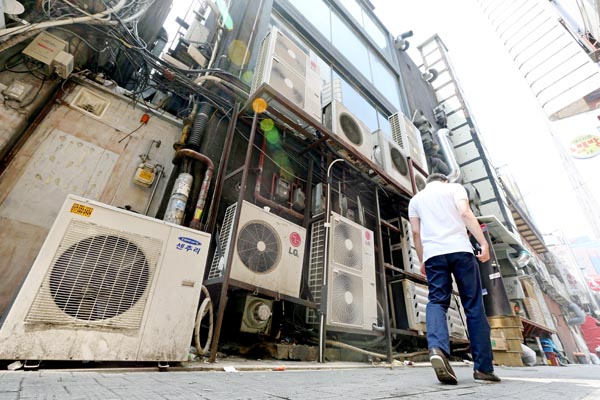 A pedestrian walks by several exhaust fans of air conditioners on the ground in the Jonggak area on Sunday in Jongno District, central Seoul. By Ahn Seong-sik

Kim Hye-kyung, a 35-year-old resident of Seodaemun District, northern Seoul, had a scare last week when she went out to Jongno District, in central Seoul, with her 3-year-old daughter.

She received a phone call and pulled her daughter into an alley with buildings tightly stacked. For a second she was distracted. When she looked back at her daughter, she was about to stick her finger into the exhaust fan of an air conditioner on the pavement.

“I don’t even want to imagine what would have happened if she got her hands into that fan,” Kim told the JoongAng Ilbo.

Lee Ji-young, a 26-year-old student preparing for the bar exam in Sillim-dong, southern Seoul, is forced to walk through an “outdoor air-conditioning fan forest” every time she returns home from lessons at a hagwon, or cram school.

“Those fans throw off a lot of heat,” Lee said. “When the temperature is high like the past few days, it makes me feel gross. It’s almost like machines ejecting bad odors, like food waste.”

Due to an early arrival of summer, more and more people in residential and commercial properties are flicking on their air-conditioners for some relief.

But they are making the environment worse for people passing by if their air conditioners are on the first floor and belch hot air at passers-by.

They are also breaking the law.

Under Ministry of Land, Infrastructure and Transport regulations, the exhaust for air-conditioners must be positioned at least 2 meters (6.6 feet) above the ground or in a way that the exhaust can’t be felt by passersby. This is true for split air conditioner units or window units.

But when the JoongAng Ilbo visited commercial areas in Sinchon, Jonggak and Myeongdong, central Seoul, on Sunday and Monday, many exhaust units of air conditioners were blasting pedestrians with 40 degrees Celsius (104 Fahrenheit) heat.

For split units, to comply with the government regulations requires a special bracket to house the exhaust unit high enough on the building’s wall. That costs money.

“Setting up the fan in accordance with the regulation costs almost as much as buying a second extra air-conditioner,” a restaurant owner in Jonggak, central Seoul, complained. “So we try to put the fans on sidewalks where not many pedestrians pass.”

In April in Osan, Gyeonggi, a fire broke out in the exhaust unit of a split air-conditioner outside a building and it poured smoke into the building’s entrance.

People inside the building had to climb to the roof to get away from the smoke and 12 people were sent to a hospital for smoke inhalation.

Local district offices have the authority to crack down on irregularities, but none of 25 district offices in Seoul regularly check for such violations. “We generally ask air conditioner owners to fix a problem if we receive a complaint,” an official of the Jongno District Office said.

“In summer, a fire can break out from a small spark when dust and grit build up in fans,” said a safety engineering professor at the Seoul National University of Science and Technology.