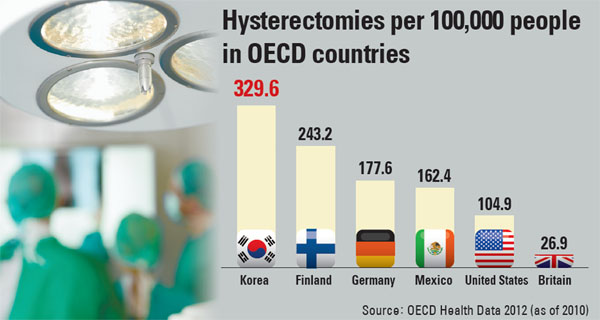 The main reason is that Korea still resorts to hysterectomies, or the surgical removal of the uterus, to treat uterine fibroids, a kind of tumor, while other developed countries now treat them in less invasive ways.

According to the 2012 Health Data of the Organization for Economic Cooperation and Development, 329.6 out of 100,000 women in Korea underwent vaginal hysterectomies in 2010, the highest proportion on the list of 34 OECD member countries. Korea’s number was about 12 times higher than for Britain, which recorded 26.9 out of 100,000 and ranked at the bottom.

In Korea, the number of women being treated for uterine fibroids is increasing because of obesity, a more Western diet and more women not getting pregnant.

According to the Health Insurance Review and Assessment Service, the number of patients treated for uterine fibroids has been going up steadily from 228,000 in 2008 to 285,000 last year.

A 34-year-old department store worker who lives in Incheon’s Seo District said she had long suffered from severe bleeding and cramps during her menstrual periods.

In March, she was diagnosed as having five fibroids in her uterus. Her doctor recommended a vaginal hysterectomy, but she became aware of another option, uterine artery embolization. It was a less invasive treatment and she said her condition improved significantly.

Another option is myomectomy, surgery to remove the fibroids while keeping the uterus intact. It cannot prevent the recurrences but it is less invasive and has fewer side effects than hysterectomies.

From the perspective of a hospital’s bottom line, however, hysterectomies are far more profitable than myomectomies. The price tag for a hysterectomy is 380,390 won ($335.50) under the health insurance system, while the surgery to remove uterine fibroids costs 232,510 won.

Furthermore, the surgery to remove uterine fibroids is more complicated and a lengthier procedure than hysterectomies. According to the medical community, a hysterectomy takes an average of 1.5 hours, while myomectomies take two to three times longer. Doctors also said the risk of bleeding is high for uterine fibroid removal surgery. They also are more familiar with hysterectomies.

“Uterine fibroids are a common condition for many women,” said Professor Suh Chang-suk of the Department of Obstetrics and Gynecology at the Seoul National University Bundang Hospital. “But there are many cases that do not require the complete removal of the uterus.”

Suh is worried about a new billing system to be implemented next month that lumps many procedures together and puts the same price tag on them.

“I am concerned that more doctors will perform unnecessary hysterectomies because it requires less time for the same cost,” he said.

Dr. Kim Min-wu of the Department of Obstetrics and Gynecology of Gangnam St. Peter’s Hospital, said hysterectomies should only be performed when they are absolutely necessary because they involve so many physical and psychological side effects. He said for the sake of the general health of a woman, it is better to treat uterine conditions while preserving the uterus.