Roh wants his slush fund back to pay fine: Wife

Roh wants his slush fund back to pay fine: Wife 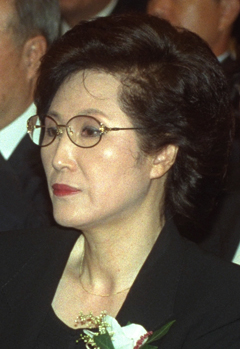 The wife of former President Roh Tae-woo has asked Prosecutor General Chae Dong-wook to help her husband recover a massive slush fund he used to control in order to pay a fine owed to the government.

Kim Ok-sook, 78, wrote a letter to Chae saying, “I sincerely ask the prosecution to claw back my husband’s property, which is currently held by his brother and Shin [Myoung-soo ] so we can pay back the fine we owe the country in time.”

The prosecution confirmed to the JoongAng Ilbo Thursday night that it received the one page letter from the wife of Roh, 81.

“Since my husband’s health condition has been deteriorating since 2007, he has been trying to pay back the fine,” Kim was quoted as saying in the letter.

Both Roh and his strongman predecessor Chun Doo Hwan were convicted of accepting bribes and accumulating slush funds during their presidencies. In 1997, the Supreme Court ordered both to pay massive fines to show contrition for the corruption during their rules.

“We had lawsuits against his younger brother and Shin to take back my husband’s assets to pay the fine but we lost those lawsuits,” Kim wrote in her letter. “We will not take a penny of those funds if the prosecution confiscates them.”

Kim may have written the prosecution because of recent awkward news reports about her husband and his slush funds. When the National Tax Service investigated Aurora CS, a logistics company established with Roh’s slush fund and currently owned by his younger brother, it discovered 3.03 billion won was allegedly being held in bank accounts in the name of Roh’s chauffeur.

There is speculation that Roh actually controls the money. Roh’s family denies it.