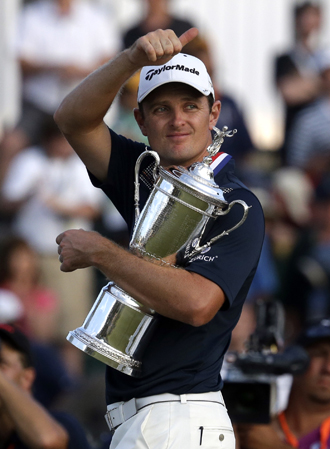 Justin Rose of England celebrates on Sunday after winning the U.S. Open at Merion Golf Club in Ardmore, Pennsylvania. [AP/NEWSIS]

Rose captured his first major championship on Sunday with remarkable calm and three pure shots on the punishing closing holes at Merion. A par on the 18th hole gave him an even par 70 and that was good enough to become the first Englishman in 43 years to win America’s national championship.

Rose hit a 5-iron to the first cut of rough, pin-high on the 17th, for an easy par. He smashed the most important tee shot of his career down the middle on the final hole, about 15 feet short of the famous Ben Hogan plaque. And his 4-iron rolled near the pin and settled against the collar of the green.

“When I came over the hill and saw my ball laying in the fairway I thought, ‘this is my moment.’ It was me hitting from the middle of the fairway,” Rose said.

As usual, someone’s big moment in the U.S. Open came at Mickelson’s expense.

Rose was in the scoring area a half-mile from the grandstands behind the 18th green where the fans began to chant, “let’s go Phil,” as Mickelson paced off a last-ditch effort to force a playoff. It was a long shot - the 18th hole didn’t yield a single birdie all weekend. From about 40 yards away, Mickelson’s chip for birdie raced by the cup, securing Rose’s victory.

Mickelson, already in the U.S. Open record book with five second-place finishes, added another that will hurt as much any of them.

Sunday was his 43rd birthday. It was the first time he was equipped with the outright lead going into the last day. His week began with a cross-country trip home to San Diego to watch his oldest daughter graduate from the eighth grade, returning just three hours before his tee time on Thursday. This was the same daughter born the day after his first runner-up finish in 1999.

All the stars were aligned but none of the putts fell in.

Mickelson surged back into the lead by holing out from 75 yards in thick rough on the 10th hole for an eagle, another moment that made it seem that surely this was his time.

But on the easiest hole at Merion, Mickelson drilled a wedge over the green on the par-3 13th for a bogey.

What hurt Mickelson even more was a wedge from about 121 yards on the 15th hole. It should have given him a good look at a birdie, but it came up so short that Mickelson’s best chance was to use one of his five wedges to chip from the front of the green. He hit that one 25 feet past the hole, and the bogey cost him a chance at the major he covets.

Mickelson wound up with a bogey on the 18th for a 74 and tied for second with Jason Day, who closed with a 71.

“Heartbreak,” Mickelson said. “This is tough to swallow after coming so close. This was my best chance of all of them. I had a golf course I really liked. I felt this was as good an opportunity as you could ask for. It really hurts.”

Day appeared to salvage his round by chipping in for a bogey on the 11th hole and he was still in the picture when he made a 12-foot par putt on the 17th to stay one shot behind. But he put his approach into the bunker left of the 18th green, blasted out to about 7 feet and missed the putt.

The back nine was a four-way battle that included Hunter Mahan, who played in the last group with Mickelson.

Rose finished at 1-over 281, eight shots higher than David Graham’s winning score in 1981 when the U.S. Open was last held at Merion.

The shortest course for a major championship in nearly a decade a held up just fine. It was the third time in the last four years that no one broke par in the toughest test of golf.

The last Englishman to win the U.S. Open was Tony Jacklin at Hazeltine in 1970.

Walking off the 18th green, Rose looked through the patchy clouds and pointed to the sky, a nod to his late father, Ken, who died of leukemia in September 2002.

“I couldn’t help but look up at the heavens and think my old man Ken had something to do with it,” Rose said.

Tiger Woods turned out to be nothing more than an afterthought. He hit out-of-bounds on his second hole, made a triple bogey and closed with a 74 to finish at 13-over 293, his worst score as a professional in the U.S. Open and matching his worst score in any major.