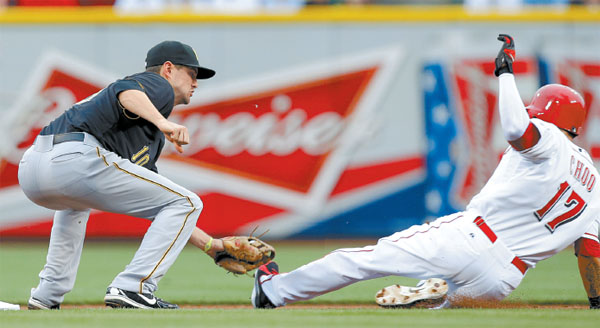 Pittsburgh Pirates shortstop Jordy Mercer, left, tags out Cincinnati Reds’ Choo Shin-soo, who was trying to steal second base after walking in the first inning of Monday’s game in Cincinnati. [AP/NEWSIS]


Choo Shin-soo, who is seeking to become the first Korean slugger to play in Major League Baseball’s All-Star Game, is seeing his chance slip away.

In the latest update of the National League All-Star vote, posted on Monday in Korean time, Choo dropped from fifth to eighth place among outfielders. Only the top three vote-getters at the close of the voting will start the All-Star Game, which will be held at Citi Field in New York on July 16. The final vote results are due out on July 7.

Choo has slumped in recent games, going 0-for-3 against the Pittsburgh Pirates at the Great American Ballpark on Monday. His on-base percentage, which was once over .500, is at .425.

He has 10 home runs, only half of NL leader Carlos Gonzalez of the Colorado Rockies. His hit his last homer on May 27 against his former team, the Cleveland Indians.

His sluggish performance is also reducing his chances of winning a big contract in free agency.

Choo, who will become a free agent after the season, is leading the major leagues in being hit by pitches at 18, an indicator of how pitchers are reluctant to deal with him. But, that alone is insufficient to earn him a hefty new contract, which once looked secure. Some potential free agents are outperforming him, including Jacoby Ellsbury of the Boston Red Sox. Ellsbury’s batting average fell to .254 last month, but rose to .276 this month. He leads the American League with six triples and 31 steals.

Choo’s other free agent competitors, Nate McLouth of the Baltimore Orioles, Hunter Pence of the San Francisco Giants and Nelson Cruz of the Texas Rangers, are performing without major slumps.

He also faces competition from his own team. Billy Hamilton, who is expected to be called up soon from the minors, is a candidate to become the team’s center fielder. He’s hitting .252, with four homers and 22 RBI with the Reds’ Triple-A affiliate. Derrick Robinson, who was obtained from the Kansas City Royals last year, is also doing his part with a .280 batting average. He substituted for Choi during the three games Choo sat out this season. The Reds won all three games.

Cincinnati already signed long-term contracts with Joey Votto and Jay Bruce, so there isn’t much money left for Choo. For Choo, things are not as promising as they seemed early in the season.