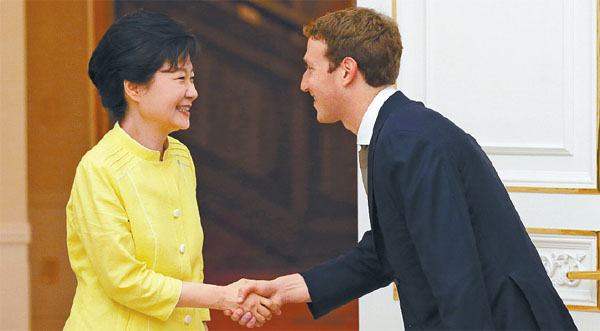 Dressed in a neatly pressed suit and tie, Mark Zuckerberg, founder and chief executive officer of the world’s largest social networking company, Facebook, stepped into the Blue House to be greeted by President Park Geun-hye yesterday on his first visit to Seoul.

The two met for 30 minutes, mostly talking about “creative economy,” which Park has pushed as a key part of her economic agenda, as well as Facebook’s plan to expand in Korea.

According to the Blue House, the 29-year-old entrepreneur, citing a recent report by McKinsey that Internet-based businesses contribute a fifth of global economic growth, stressed his strong support for creative economy as well as cooperation with the Korean government.

He noted that Korea is an important market for Facebook, saying he plans to double the size of operations within a year while emphasizing cooperation with local developers. 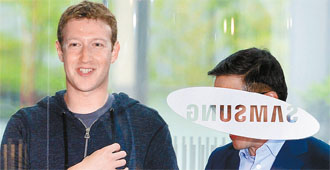 The 29-year-old IT entrepreneur later showed up at Samsung Electronics headquarters in Gangnam, southern Seoul, for discussions with executives and dinner with Vice Chairman Jay Y. Lee. [Joint Press Corps/NEWSIS]

Later in the day, Zuckerberg headed to southern Seoul for a session with top Samsung executives at the conglomerate’s headquarters.

Zuckerberg showed up about 1:45 p.m. in more familiar attire: hoodie, jeans and sneakers. In one hand he held a Galaxy S4.

Zuckerberg and his associates stayed well past 5 p.m. after having dinner with Samsung Group heir and Vice Chairman of the electronics flagship Jay Y. Lee.

The meeting has set off speculation about possible future collaboration, especially considering the members of Zuckerberg’s entourage.

The group that arrived in Gimpo on late Monday included Dan Rose, Facebook’s vice president of global business and corporate development, and design director Adam Mosseri, who is in charge of the company’s latest initiative, Facebook Home.

Rose, who joined Facebook in 2006 after working at Amazon for seven years, is one of Zuckerberg’s closest associates and has been with the company from almost the beginning. He is responsible for business partnerships and mergers and acquisitions.

Mosseri, who joined Facebook in 2008, is the force behind Facebook Home, a user interface layer for Android-operated smartphones.

Facebook recently collaborated with the Taiwanese smartphone developer HTC and launched HTC First with preinstalled Facebook Home as its main interface in April.

However, the joint venture did not go as smoothly as expected, as sales have failed to take off in both the United States and Europe and both the software and hardware received bad reviews.

It was reported last month that AT&T, the largest U.S. telecommunications company, may discontinue sales of the phone.

It is also has been reported that Samsung is trying to reduce its dependence on the Android operating system. The tech giant has often been noted for its lack of competitiveness in software.

Samsung has not made any comment regarding the meeting between Zuckerberg and Lee.