Hong to take the reins of national football team

Hong to take the reins of national football team 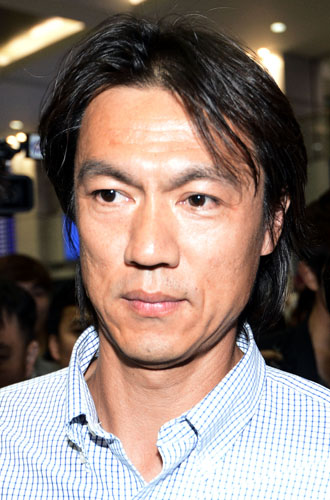 The KFA held an executive meeting at the National Football Center in Paju, Gyeonggi and selected the former Olympic coach to replace Choi Kang-hee.

Choi, 54, stepped down last week after ending his sporadic 18-month stint with a 1-0 loss to Iran.

Despite the loss, Korea secured its eighth successive World Cup berth as runner-up to Iran in Group A.

The KFA said it offered Hong, 44, a two-year contract to lead the Taegeuk Warriors at the 2014 Brazil World Cup and the Asian Football Confederation Asian Cup in Australia in 2015.

Hong was rumored to be taking the helm of the senior national team as early as January, when he left for a four-month training program with Anzhi Makhachkala, a Russian professional club managed by Hong’s former mentor Guus Hiddink.

Hong, who returned from a break in the U.S. yesterday, said it was an honor for him to assume management of the national team while expressing confidence in his new job.

“Korean football will take another leap from now on,” Hong told reporters upon arriving at Incheon International Airport. “To that end, I will give everything that I have.”

The selection was made five days after the KFA drafted a four-man shortlist. Hong was considered the favorite from the beginning, with former Turkish national coach Senol Gunes thought to be his strongest competitor. KFA vice president Huh Jung-moo was reported to be planning to meet Gunes for a job interview on the sidelines of the ongoing U-20 World Cup in Turkey, but the KFA did not disclose whether Huh actually met the former FC Seoul coach. The KFA also refused to provide details about the other candidates.

Hong, the captain of the semifinal team during the 2002 Korea-Japan World Cup, coached Korea to a bronze medal during the 2012 London Games, the nation’s first-ever Olympic medal in football.

He served as assistant coach of the senior national team led by Dutch coach Dick Advocaat during the 2006 Germany World Cup.

Hong made his debut as head coach with the U-20 national team in 2009 and led the team to the quarterfinals of the U-20 World Cup. He also led the team to a bronze medal at the 2010 Guangzhou Asian Games.

Hong built himself a stellar career as an athlete, having played in four World Cups - the most for a Korean player.

At his final World Cup in 2002, he scored the winning penalty against Spain in the quarterfinals.

The former Pohang Steelers defender was capped 136 times and scored 10 goals for Korea.