Park In-bee ties for most season wins by Korean

Park In-bee ties for most season wins by Korean 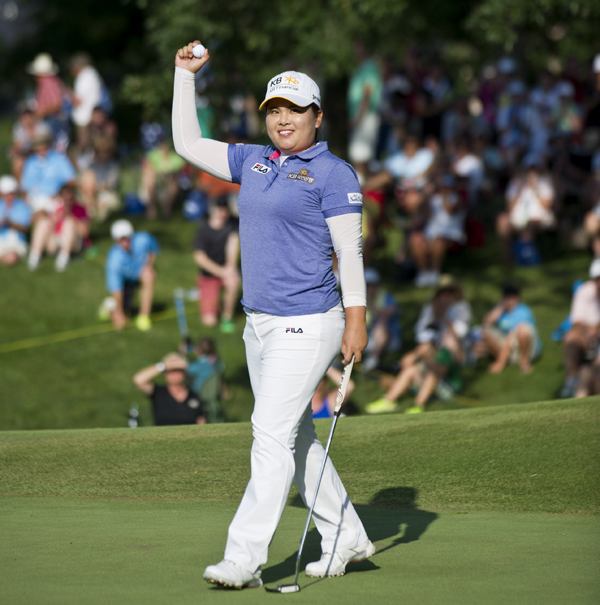 Park In-bee reacts after making a putt on the 18th green during a playoff in the final round of the LPGA NW Arkansas Championship golf tournament on Sunday in Rogers, Arkansas. Park won the tournament in a playoff against compatriot Ryu So-yeon. [AP/NEWSIS]

Park In-bee tied with Hall of Famer Pak Se-ri for the most single-season LPGA wins by a Korean after her fifth victory of the season yesterday Korean time. The world’s top-ranked female golfer capped her final day rally at the Pinnacle Country Club by holding off her compatriot Ryu So-yeon with a four-foot birdie in the first playoff hole to capture the LPGA NW Arkansas Championship. Park’s fifth LPGA win of the season, her eighth overall, tied her with Pak, the 25-time winner who won five times in 2001 and 2002.

This was a back-to-back win for Park, who also came out on top at the Wegmans LPGA Championship two weeks ago.

“It feels great,” Park, 24, said after winning the Arkansas Championship, according to LPGA.com. “I played a good three rounds of golf. Just before the U.S. Open, I think it just gives me a lot of confidence.”

Park, who enters the U.S. Women’s Open this week, is looking to become only the second player in LPGA history to win the first three major events of the season. She also won the Kraft Nabisco Championship in April.

With more than a dozen tournaments ahead, she could also break the record for single-season victories by an Asian player, set by former world No. 1, Yani Tseng of Taiwan, who won seven times in 2011. Having kept the top position for 11 straight weeks, Park is also leading the race for the LPGA Player of the Year award, never before won by a Korean.

This is the second time this year that Park has won a title by defeating Ryu. Ryu finished runner-up at the Nabisco Championship, four strokes behind Park.

Ryu entered the final round in Arkansas tied for first place with three others, two strokes ahead of Park, but Park forced a playoff with Ryu after carding a 4-under 67 in the final round.

“It was tough playing with a good friend in the playoff,” Park said. “I think it’s actually better to just get it over and done with on the first hole than, you know, trying to play every hole with her. I was just glad that I birdied the first hole. I just love the way I played this week.”

Park vaulted to the top with three straight birdies on the front nine. She dropped a shot with a bogey on the par-3 11th before birdies on 14 and 18 sent her to the playoff.

Park and Ryu finished the tournament tied at 12-under, one shot ahead of Mika Miyazato. This is the second straight year that Miyazato has finished as runner-up.

Amateur Lydia Ko, Kim In-kyung, and local favorite and world No. 2 Stacy Lewis, who played at nearby University of Arkansas, each finished two shots back.

“I do feel a little disappointed,” Ko told LPGA.com. “I left a couple putts short that were on line, but I guess after every tournament, I kind of come off wanting to do a little better.”

Ko will now enter her second U.S. Women’s Open having won a third top-10 finish on the LPGA Tour this year.

Ryu and Park were tied entering the final hole of regulation at 11-under, with Park playing one group ahead of her fellow Korean.

Park reached 12 under with an 8-foot birdie putt, while Ryu answered with a similar 8-footer a group later - sending the players back to the par-5 18th tee for the playoff.

Park found the fairway off the tee, and after her second shot came up just short of the green, she chipped within four feet.

That put pressure on Ryu to hole a chip for birdie from just off the back of the green - a chip she narrowly missed. Park then calmly sank her birdie putt to end the tournament and once again find herself a winner.

Ryu, No. 5 in the world, led at 12 under midway through the round. However, she four-putted the par-4 13th for a double bogey.

Lewis began the day as the co-leader and local favorite, with a gallery full of Arkansas fans following her every shot. But she stumbled with a double bogey on the par-5 seventh. After driving in the bunker, she took two shots out of the greenside bunker before missing a short bogey putt.

Lewis bounced back with birdies on the next two holes to once again reach 10 under. She later missed birdie putts on 11 and 12 and was unable to get closer than one shot, dropping out of contention after back-to-back bogeys and on 15 and 16.