BOK gold loses some of its luster

BOK gold loses some of its luster 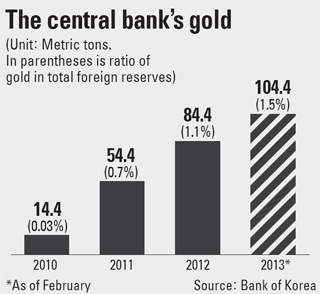 As the international price of gold bullion continues to fall even below $1,200 for the first time in nearly three years, the Bank of Korea is once again questioning its gold purchases.

Gold has fallen for five consecutive days to hit its lowest level in 34 months, the worst quarterly slump in at least nine decades, amid speculation that the U.S. Federal Reserve will be reducing its stimulus of the U.S. economy. Silver is headed for its biggest quarterly loss since 1980.

Prices have dropped 25 percent since the start of April, the biggest quarterly slide since at least 1920, according to data compiled by Bloomberg.

Gold is headed for the biggest annual decline in more than three decades after gaining for 12 years. Investors are selling bullion from exchange-traded products at a record pace as unprecedented money printing by central banks around the world failed to spur inflation. Analysts from Morgan Stanley to Credit Suisse Group and Goldman Sachs trimmed gold forecasts this month on prospects for reduced asset purchases.

“We’ve had quite a lot of positive data out of the U.S. and people are still focused on the tapering off of stimulus, so gold’s been hit quite hard,” Alexandra Knight, an economist at National Australia Bank, said. “There’s definitely been a loss of confidence in gold and that’s seen in the ETF liquidations.”

Fed Chairman Ben Bernanke said this month that the U.S. central bank, which buys $85 billion of Treasury and mortgage debt a month, may trim purchases this year and end the program in 2014 should the economy continue to improve. Data this week showed U.S. consumer spending, durable goods orders, consumer confidence and home sales rose in May, even as economic growth in the first quarter was less than previously estimated.

Gold has fallen 29 percent in 2013 as investors sold 583.2 metric tons of gold from ETPs, erasing more than $63 billion in the value of the funds. A lack of accelerating inflation and concerns about the strength of the global economy is also hurting silver, platinum and palladium, which are used more in industry.

Although gold prices have been falling, the Korean central bank earlier this year increased its gold holdings, which it has been doing in the last two years.

The Bank of Korea made its first purchase of gold in August 2011 by buying 25 metric tons worth $1.2 billion.

The last purchase it has made so far was in February when it bought 20 additional tons.

As a result the central bank now has a total of 104.4 metric tons of gold in its foreign reserve holdings, which accounts for 1.5 percent of the total.

The central bank’s position is that the current devaluation of gold is meaningless since the BOK’s investment is not aimed at making profit in the short-run. It’s a long-term investment, it says, for at least 10 years.