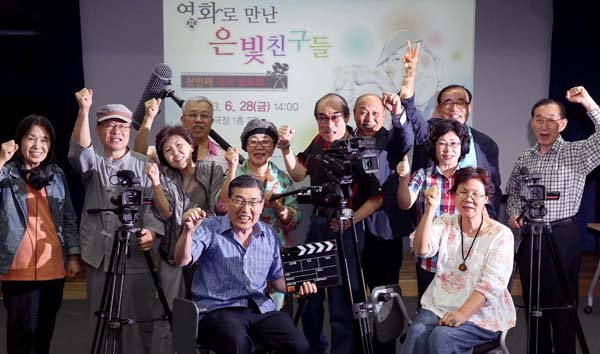 Twelve seniors gather as part of a filmmaking program sponsored by the Seoul Media Center. By Kim Kyung-bin

Seoul Media Center, located in central Seoul, ran a filmmaking program for senior citizens for 10 weeks. Participants attended lectures on theory but were also able to make short films with provided equipment. Thanks to the generous class, the 12 seniors have been given a new hobby to pursue.

On the last day of editing, the amateur filmmakers were busy polishing their clips. Among them was a senior couple, both 63, staring at a computer screen and bickering about what font to choose. But despite the argument, Uhm Soon-yi and Hong Seong-hee seemed quite happy to be in the class.

Uhm worked as the director and created a film that chronicles a week in the life of her husband. Their work was titled “Do-Gooder.”

“He is a do-gooder, and he is very positive, finding meaning in every little thing,” Uhm explained,

Like the couple, other students have inserted their lives into 10-minute clips.

Park Kyung-sook, 60, told of the ups and downs of her life, and most importantly, the dream she is still working to achieve. In the past, she had a successful garment business but experienced a sudden downturn during the 1997-98 IMF crisis. Her life’s work was shattered, but she was able to pick up the pieces by setting her sights on becoming a social worker and advancing to college.

Park titled her film “Stairway to the Sky.”

“I made the movie to praise and encourage myself for working to be closer to my dream little by little although the dream seems to be as far as the sky,” she said shyly.

Lee Sung-tae, 64, created “Beautiful Accompaniment,” a short film that tells the story of a regular civil servant on the brink of retirement and a part-time street cleaner. They sympathize with each other and put their heads together to find a way to live happily. Other attendees played roles in the film as well.

Kim Si-jong, 65, who describes himself as being fond of rock climbing, said “It is really a shame that the class is already over. I want to take an advanced class so I can produce more professional films.”

He was not alone in developing a seemingly insatiable appetite for filmmaking as the students are now working to organize a club for film production. Their films were screened yesterday at Daehan Cinema in Chungmuro, central Seoul.