Win for Dodgers, but not Ryu, as bullpen falters

Win for Dodgers, but not Ryu, as bullpen falters 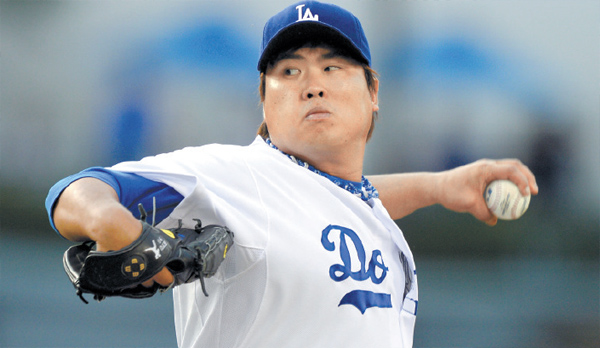 A long-awaited seventh win evaded Ryu Hyun-jin once again as Los Angeles Dodgers reliever Kenley Jansen surrendered a game-tying run in the ninth inning at Dodger Stadium yesterday in Korean time. Jansen (2-3) got the victory as the Dodgers beat the Philadelphia Phillies, 4-3, on catcher A.J. Ellis’ walk-off single in the bottom of the ninth.

Ryu allowed two runs - on two homers, both to Chase Utley - and scattered five hits over seven innings. He struck out six and allowed three walks before he saw his last chance to pick up a win in June dashed away.

Ryu (6-3) recorded a quality start in all of his five games this month, during which he posted a 2.70 ERA, but had no wins and suffered a loss. It was the Korean rookie’s fifth unsuccessful attempt to win after earning his sixth victory with his first shutout in the major leagues against the Los Angeles Angels on May 28. His season ERA is 2.83 in 16 games.

The game drew additional attention from Korean fans as it was Ryu’s first duel with Phillies’ starter Cliff Lee, whom Ryu said is his idol. Lee gave up three runs on four hits over seven innings, while striking out 10. He avoided taking the loss when the Phillies tied the game in ninth.

The Dodgers won for the seventh time in eight games, bouncing back from a 16-1 loss Friday that was the franchise’s most lopsided at home since a 19-2 rout by the New York Giants on July 3, 1947 - during Jackie Robinson’s rookie season.

Jansen came in trying to protect a 3-2 lead in the ninth for Ryu, but was charged with his third blown save in 10 chances as a result of some shoddy defense by his teammates.

Michael Young led off the ninth with a single down the right-field line and continued to second when rookie Yasiel Puig misplayed the ball for an error. Young advanced on Utley’s groundout and held up on Jimmy Rollins’ shallow fly to center fielder Kemp, whose hurried throw to the plate was about 20 feet to the first-base side and bounced away from catcher Ellis, allowing Young to dash home with the tying run.