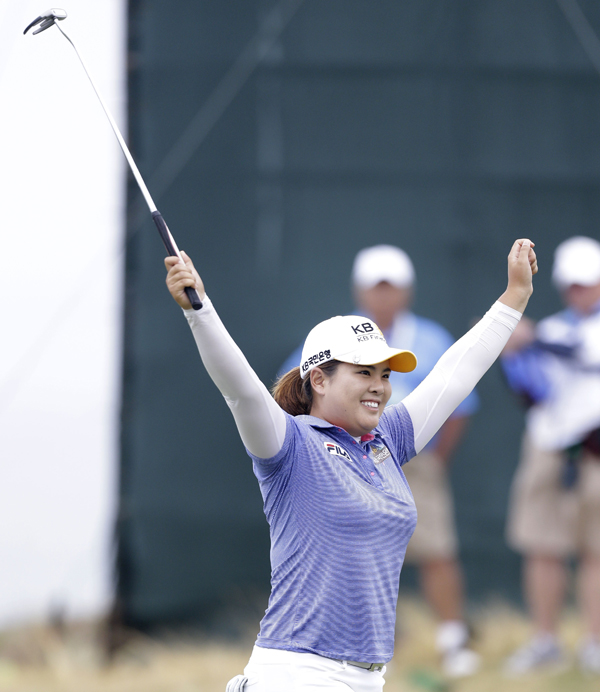 Park In-bee reacts after sinking her last putt on the 18th green to win the U.S. Women’s Open golf tournament at the Sebonack Golf Club on Sunday in Southampton, New York. [AP/NEWSIS]

Park In-bee opened a new chapter in the already trophy-filled history of Koreans in the LPGA with her second title at the U.S. Women’s Open in Southampton, New York yesterday, Korean time. It was the 24-year-old’s third consecutive major this year, a feat that neither the queen of golf, Annika Sorenstam, nor her successor, Lorena Ochoa, achieved during their long reign.

Park shot a two-over 74 during the final round at Sebonack Golf Club to finish at eight-under-par 280, clinching a four-stroke win over her compatriot Kim In-kyung. With that, the world’s top-ranked golfer, who also won the Kraft Nabisco Championship in April and the Wegmans LPGA Championship three weeks ago, became only the second player on the LPGA - and the first in the modern era - to win the first three majors of a season.

Babe Zaharias accomplished the feat in 1950, when there were only three majors on the world’s most competitive golf circuit for women. Two other American Hall of Famers, Mickey Wright and Pat Bradley, also won three majors in 1961 and 1986, respectively, but won them inconsecutively.

“I’m just very honored to put my name next to someone like Babe Zaharias,” Park told LPGA.com. “I don’t know what I just did today; it’s something very great. It’s scary to think about what I am capable of doing.”

As dazzled as she seemed by her own talents after the competition, Park kept her famously unflappable demeanor intact on the course, leading from the second round onward. Park built a six-stroke lead over Kim, but that dropped to four after bogies on
the 14th and 15th, but she held on and closed the last three holes at par.

“Believe it or not, I was very calm out there,” said Park, who won eight titles in her last 24 starts. “It was weird; I didn’t feel much pressure when I was on the golf course. I was nervous last night, but on the golf course, somehow, I felt very calm.”

“I’m not sure how much pressure she has, but I think she’s managing it really well,” said Kim, who held off Park in 2005 to win the U.S. Girls’ Junior title. “Not many people can do that. I think she’s on the right track. She’s happy with her life, you know, not just golf, but she has her family together and friends and all that. So I think that’s what works for her.”

The winner of the 2011 U.S. Open, Ryu So-yeon, 23, was the only other player to finish under par for the week, at one-under. It was the second week in a row that Ryu popped the champagne for Park after losing a one-hole playoff at the Walmart NW Arkansas Championship last week. 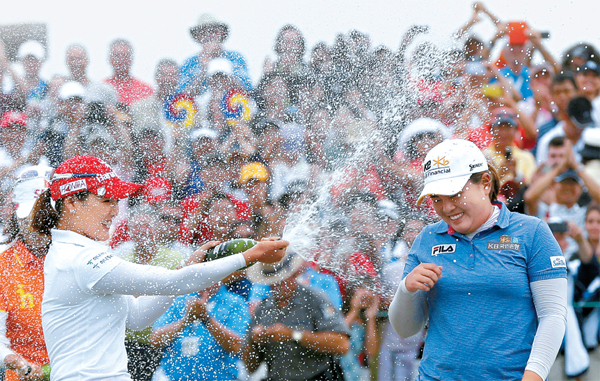 With the titles at Arkansas and Wegmans, Park has also become the first player to win three consecutive LPGA events since Ochoa won four straight in 2008. She will try to tie Ochoa at the next stop on the LPGA calendar, the Manulife Financial LPGA Classic in Canada next week.

It was Park’s sixth win this season, which moved her past her idol Pak Se-ri as the Korean with the most wins in a single LPGA season. Pak, 35, won five times across the two years through 2002.

Park is well on track to become the first Korean to win the Player of the Year award. The 2012 money leader is also looking likely to defend the money title with a season-leading $2.1 million so far. She has already put her name at 20th on the LPGA Career Money List, with $7.3 million. The LPGA has 12 events left before the season wraps up.

The most wins record was the second Park has stolen from Pak. She also won the U.S. Open in 2008 at the age of 19 years, 11 months and six days old, which was around 10 months earlier than Pak’s youngest win record, which she set in 1998 at 20 years and nine months.

Pak, the only Korean member of the LPGA World Golf Hall of Fame, has 25 titles to her name. But Park is quickly catching up. With the U.S. Open win, her ninth, Park nudged aside another first-generation Korean, Kim Mi-hyun, to become the third-most winning Korean on the tour. Kim, 36, won eight LPGA titles before retiring last year. Shin Ji-yai, 25, is second with 11 victories.

Park already surpassed Shin as the longest-reigning Korean. Park is in her 12th consecutive week at No. 1. Shin, the first Korean to earn the top rank, held on for nine weeks in 2010.

Park will tie Pak for the most major wins by a Korean with one more, which will be her fifth. If she takes the two remaining majors this year, she would become the only golfer in the world, male or female, to ever get a grand slam in a single season.

Park has a better shot. The Evian Masters in September, which she won last year, has been promoted to the fifth major this year, which could give Park a second chance if she fails to win the British Open at St. Andrews next month. As it’s the first year for there to be five majors, it’s generally agreed that four makes a grand slam, at least for this season.

“I think it’s too early to think about the next one,” Park said. “I think I really want to enjoy the moment as it is, in the moment. I mean, a grand slam is very big. I probably won’t get this kind of opportunity ever again. I know this year is a good opportunity for me.”

“I mean, I haven’t done that yet. It would mean so much if I could do the grand slam. But takes so much hard work, and it takes a lot to do. I’m just glad that I can give it a try at St. Andrews. That’s going to be a great experience. Whether I do it or not, I’m just a very lucky person.”