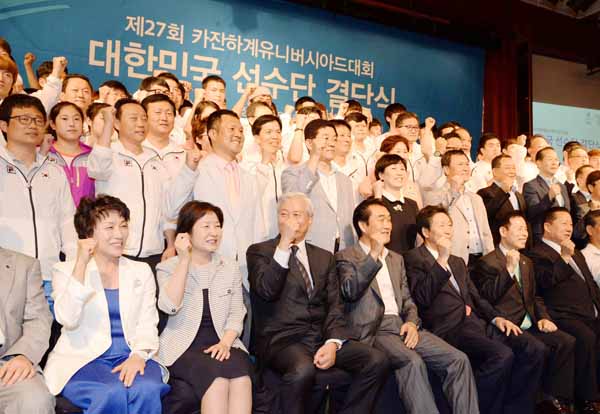 The athletes and officials of Team Korea psyche themselves up for the 2013 Summer Universiade in Kazan, Russia, at a launching ceremony held at Olympic Parktel in Songpa District, southern Seoul, on June 26. The event kicks off on Saturday. [NEWSIS]

Korea is ambitiously seeking to defend a third-place finish at the Summer Universiade despite the fact that its two gold mines - taekwondo and archery - will not be included.

Around 13,500 athletes and delegates from 170 countries will compete in the biennial summer event to be held between July 6-17 in Kazan, the capital of Tatarstan in Russia. Korea is sending 234 athletes.

The Korean team won 28 golds to finish third in the previous event in Shenzhen, China in 2011. But archery and taekwondo, which brought home 13 golds that year, were not adopted as optional sports for Kazan.

Sanctioned by the International University Sports Federation (FISU), the Summer Universiade features 10 compulsory sports and three optional sports, which are chosen by FISU and the host country. Sambo, a Russian martial art, was adopted in 2010 as an optional discipline for Kazan.

It’s a huge blow to Korea, which won 12 out of 21 gold medals at the 2009 Summer Universiade in Belgrade in taekwondo and archery.

But the Korean team is confident it can fill the gap with fencing and gymnastics. Its goal is 25 gold medals.

“We would’ve set the runner-up spot as our goal if we had had archery and taekwondo,” Kim Seung-chul, the Team Korea leader, told reporters.

Korea won two silver, seven bronze and no golds in fencing in Shenzhen. It’s gold hopes for Kazan are pinned on London Olympic team members like Kim Ji-yeon and Shin A-lam, who contributed to Korea’s runner-up finish to Italy in fencing in London.

Taekwondo and archery will likely be adopted as optional programs at the next Summer Universiade in Gwangju, Korea, in July 2015. They’re scheduled to be included on the compulsory program beginning in 2017 and 2019, respectively.