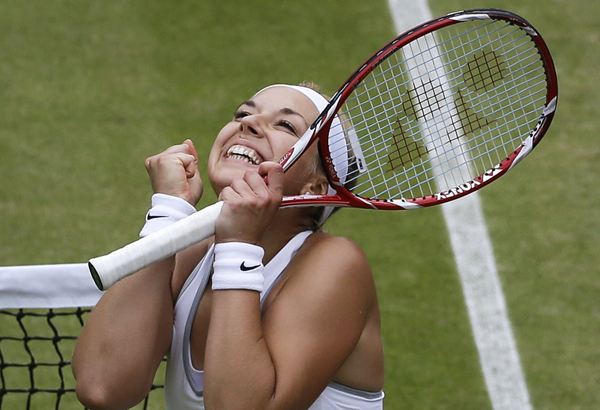 Sabine Lisicki of Germany reacts as she wins a women’s singles quarterfinal against Kaia Kanepi of Estonia 6-3, 6-3 in Wimbledon, London, Tuesday. [AP/NEWSIS]

LONDON - If Sabine Lisicki had a letdown after defeating Serena Williams, it didn’t show.

If Lisicki is penciling herself into the Wimbledon final, she isn’t saying.

Showing no drop-off after her dramatic victory over Williams, the 23rd-seeded Lisicki returned Tuesday and made quick work of a much less intimidating opponent, 46th-ranked Kaia Kanepi, dispatching her 6-3, 6-3 in 65 minutes to advance to her second career Wimbledon semifinal.

“I was ready today,” Lisicki said. “I knew from the past, out of experience, that I needed to make the switch quickly to be ready, and that’s what I did.”

Indeed. Lisicki opened the match by breaking Kanepi’s serve in the first game and didn’t look back in that set. In the second, she had one hiccup - a game in which she double-faulted three times to drop a break and fall behind 2-1. She broke back right away, however, and won four of the next five games to close out the match.

Now, the 23-year-old German finds herself in the Wimbledon semifinals for the second time in three years. Her win against Williams made her the new, odds-on favorite to win the title and even pushed Britain’s favorite tennis player, Andy Murray, off the back pages of a couple London tabloids.

All of which means almost nothing - at least to hear Lisicki tell it.

“Match by match,” she said. “Did that from the start and will continue to do that.”

Her next opponent is No. 4 Agnieszka Radwanska, who defeated No. 6 Li Na 7-6 (5), 4-6, 6-2 in a match that took more than three and a half hours to complete and included two rain delays, an injury timeout and a final game that lasted more than 10 minutes.

The other semifinal will pit No. 15 Marion Bartoli of France against No. 20 Kirsten Flipkens of Belgium.

Flipkens beat eighth-seeded Petra Kvitova 4-6, 6-3, 6-4 to knock the last remaining Grand Slam tournament winner out of the draw. Flipkens won her first career Grand Slam quarterfinal, continuing quite a comeback from health problems that dropped her to No. 262 last year, not even eligible for the Wimbledon qualifying tournament.

Bartoli eliminated the last remaining American singles player, beating Sloane Stephens 6-4, 7-5 in a match halted with Stephens serving, down 5-4 at deuce. After the delay, Bartoli came out and won two points to secure the first set. Soon after, she was showered with boos because she had asked the umpire to stop the match in the first set when it started sprinkling on Court 1.

“I didn’t really get why the crowd was so against me at that point,” Bartoli said.

“Already, the courts were a bit slippery even when it’s dry. When it’s wet, it can get dangerous. I didn’t want to stop the match for no reason. It was a precaution.” AP