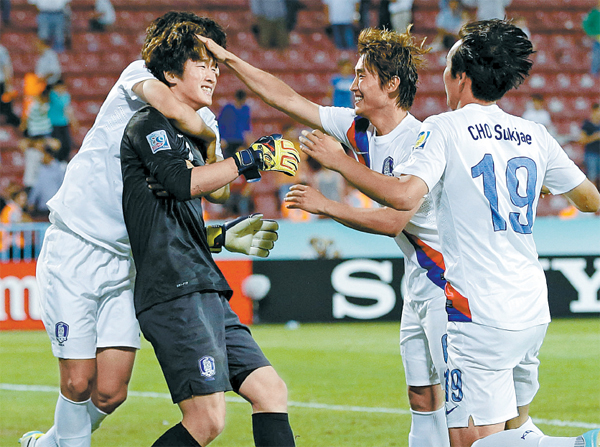 Korean goalie Lee Chang-geun, in black, celebrates with his team after winning their Under-20 World Cup round of 16 match with Colombia in Trabzon, Turkey, Wednesday. Korea won 8-7 following the shootout. [AP/NEWSIS]

Korea beat a pre-tournament favorite Colombia 8-7 in a penalty shootout to advance to the quarterfinals of the U-20 World Cup in Turkey yesterday Korean time.

It is the fourth time that the Asian champion advanced to the last eight of the biennial intercontinental event after reaching the semifinals in 1983 and the quarterfinals in 2009. Korea also made it as far as the quarterfinals in the 1991 event when it fielded a unified team with North Korea.

Lee Kwang-jong’s squad will face off against Iraq in the quarterfinals on Sunday night, Korean Time, in a rematch of the finalists of the 2012 Asian Football Confederation U-19 Championship. Korea, also led by Lee, downed Iraq 4-1 in a penalty shootout in the Nov. 17 final.

Iraq, the winner of Group E, reached the quarterfinals with a 1-0 win over Paraguay yesterday.

Song Ju-hun put Korea ahead in the 17th, before Juan Quintero canceled it out with a last-minute free kick effort. After a scoreless extra time, Deivy Balanta failed to net his penalty attempt, ending a bid for a second semifinal appearance of the 2003 third-place team.

It was an upset for Colombia, who won Group C with two wins and a draw. Korea advanced to the Round of 16 as a third-placed wild card team from Group B.

Korea entered yesterday’s match with two recent losses to Colombia, including a 1-0 loss at the group stage of the previous U-20 World Cup. Korea’s U-21 team, including many of the U-20 members, also lost to the South American team, 1-0, in the Toulon Tournament in France in May.

Lee said his team could overcome their technical inferiority to Colombia by taking advantage of teamwork. Colombia recorded 22 shots against Korea as opposed to Korea’s six.

“Colombia is excellent in speed and individual skill, but we did well strategically throughout the 90 minutes and the extension,” Lee told reporters after the victory.

At Huseyin Avni Aker Stadium in Trabzon, northeastern Turkey, Korea found a chance early when Kim Sun-woo’s free kick into the box was cleared with a header by defender Felipe Aguilar, which Kwon Chang-hoon headed back from the edge of the box.

Song picked it up with the right foot, kicked it up while spinning around, and connected with a left-footed grounder before falling down, which beat three defenders and goalie Cristian Bonilla into the right corner of the net.

Colombia, considered by bookmakers to have the second best chance next to Spain to win the tournament, was eager to turn the table with a 55 percent goal possession, but could not mount an effective threat except for Balanta’s diagonal shot from right that ended up hitting the left crossbar.

Captain Quintero, a midfielder who scored two goals in Turkey previously, forced extra time with a strong free kick in the fourth minute of stoppage time. The extra time passed with few significant threats from both sides as fatigue slowed the pace.

Song, Korea’s second kicker during the shootout session, was almost turned from a hero into a villain with his penalty kick floating over the bar, but Korean goalie Lee Chang-geun made it even, saving a grounder by Colombia’s third kicker Aguilar.

Colombia’s ninth kicker Balanta sent his penalty shot over the bar, and had to watch Koreans rushing across the pitch to embrace each other in celebration.