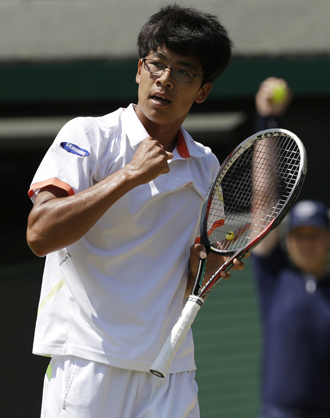 Coaches confident that Chung Hyeon can be a world-class player

The unseeded Chung allowed a rally to lose to world No. 7 Gianluigi Quinzi of Italy, 7-5, 7-6 (2) at the junior men’s singles final at Wimbledon on Sunday, failing to become the first Korean to win a junior major.

Ranked 41st in the world, Chung upset world No.1 Nick Kyrgios of Australia, No. 6 Borna Koric of Croatia and 30th-ranked Maximilian Marterer of Germany en route to the Wimbledon final.

“I am happy that I could win a second-best title in such a major event like this,” Chung said at Incheon International Airport yesterday. “I will try to lift up a trophy, not just in a major on a junior level, but in a major on a senior level.”

Chung said the Wimbledon final appearance was a huge confidence booster for him. It was the first time he played at Wimbledon. He advanced to the Round of 16 at the Australian Open in January, where he lost to Koric. “I could learn a lot of things as I played difficult games in this event,” Chung said. “I got confidence from the fact that I still could advance to the final.”

Chung led Quinzi, 5-3, in the first set before surrendering the next four games. He repeated the pattern in the second set, giving away a 6-5 lead.

“I am sorry that I suffered a rally when I was leading, 5-3, but that is a situation that athletes can face anytime in sports,” Chung said. “From now on, I will try to rally from a losing game.”

He received a medical check when he was ahead 2-1 in the second set. He played with a blister on his right foot. Chung refused to attribute it to the loss.

“It (the blister) is something taken for granted for overcoming if you are a tennis player. It did not affect the game that much,” he said.

He said that he will try to lift his serving to the level of the top players in Europe. He also pointed out a mental aspect as an area in which he can improve.

He said his role model is Lee Hyung-taik, 37, who was ranked No. 36 in the world in 2007, the highest ranking a Korean has ever reached.

“I will work hard so that I can surpass Lee Hyung-taik, who is like the living history of Korean tennis,” Chung said.

Yoon Yong-il, who is coaching Chung on the Samsung Securities’ tennis team, was confident that Chung can do it.

“Chung Hyeon is a talent that can come within the top 20 in the world on a senior level,” Yoon said. “His backhand technique and focus is at a world-class level. He will be a better player if he improves on serve and net play.”