Go for the fast deal

Go for the fast deal 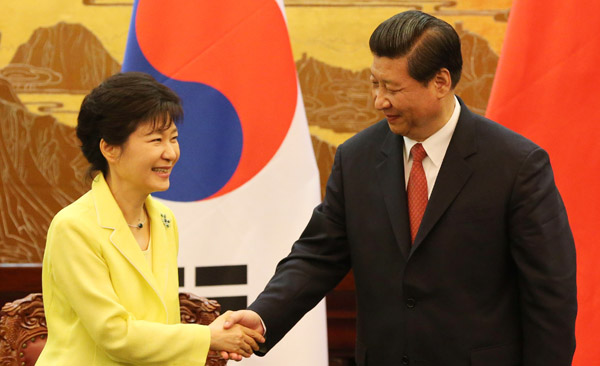 I was in Shanghai last week for a conference on the theme of China and the so-called middle-income trap. Unlike Incheon International Airport, and most other public facilities forced to save energy by administrative order in Korea, Hongqiao International Airport was cool inside - even on the sidewalk taxi stand. They are free with their cool air.

China also suffered power shortages in the early stages of market reforms while opening up to the outside world. But those days are long gone as South Korea and China are now polar opposites in terms of energy resources. China is also expected to outperform South Korea soon in some areas of manufacturing competitiveness. The talks on a bilateral free trade agreement between the two countries that have recently picked up momentum must take these changes into account.

The leaders of the two countries - Park Geun-hye of South Korea and Xi Jinping of China - announced in a joint press conference following a recent summit in Beijing that the two governments must “draw up an agreement promptly to come up with a higher level of FTA.” I have urged Seoul to hasten free trade talks with China for the past 10 years because if it drags its feet too long, it will come to a point where it can do better without a free trade pact because China would be stronger in competitiveness.

We may have already approached such a stage. South Korea today doesn’t merely assemble but also produces parts and materials in China. If we had achieved a free trade platform earlier, Korean companies need not have gone to China and built factories. They could just export goods without any tariff constraints. We lost the moment and most Korean manufacturers are now based in China. The FTA’s effect on industrial products could therefore be reduced.

Despite earlier protests and concerns, the free trade agreements with Europe and the United States have so far been more beneficial than harmful to our economy. But China is entirely different from those two advanced markets with their mature and stable industrial structures. China’s industrial competitiveness is rapidly growing and it is the world’s largest industrial powerhouse close to Korea. South Korea has not thoroughly studied nor can it decipher what an integration with the world’s most populous country would do to the local economy. A tariff-free pact could be a windfall to South Korea, but at the same time could suck the local market into becoming a kind of greater China. What is the plan to turn the pact to our favor?

An FTA can be one of two types. The first is a comprehensive, high-level, maximum opening agreement similar to the deal Korea settled with the U.S. The other involves incremental opening and liberalization, leaving out sensitive areas like farm goods. In view of long-term uncertainties, the latter arrangement would better suit the two countries. It would be more practical for Seoul and Beijing to exclude sensitive areas and settle for a narrow free trade deal at the beginning. Instead of a full and high-level opening, which we can dub American-style, a limited and narrower Asian model would be a safer choice.

China has a similar pact with Taiwan. The two states left out the services sector and settled an agreement in 2010 to eliminate tariffs on industrial items under a so-called “early harvest” list. The pact was criticized in the initial stage. But the mainland and Taiwan now have extended the deal to the services sector.

Even with a limited scope, South Korea would have advantages to enjoy tariff eliminations in China as the first major manufacturing country. An FTA is a long-term trade platform that can be gradually built, developed and extended. Seoul should approach it from a long-term perspective. It must work on opening areas where South Korea will have an edge over China later rather than now. Taiwan had to consider factors differing from South Korea, but nevertheless it is now worried about the mainland’s increasing influence in its country beyond trade.

The geopolitical environment around the Korean Peninsula has changed greatly over the last decade. In the past, South Korea simply studied the economic benefits and China the political gains from a bilateral free trade deal. Now, a trade partnership with China could help South Korea even more on the political front - such as with the North Korean nuclear issue - than economically. The best choice would be a quick, narrow-level deal.

* The author is a professor of economics at Seoul National University and director of the Center for Economic Catch-up.