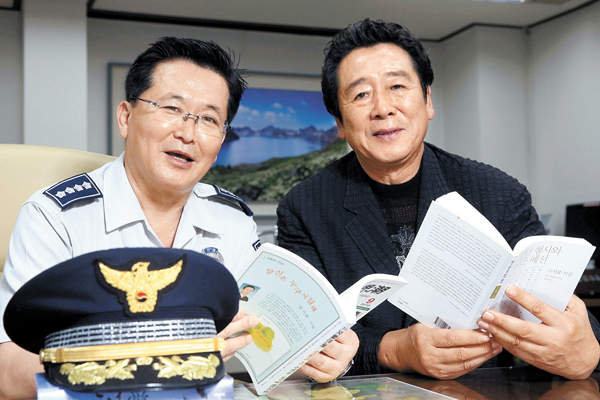 Nam Byeong-geun, chief of Yeoungdeungpo Police Precinct, left, and Go Seok-jong, chief of the precinct’s narcotics investigation team, express what they feel while on the job through poetry. By Kim Sang-seon

One scorching hot afternoon of June 24, police offers were on standby for possible emergencies at a rally in Yeouido, western Seoul.

There, one officer, Nam Byeong-geun, chief of the Yeoungdeungpo Police Precinct, quietly recited a poem he wrote.

“The roar of the people resounds .?.?. piercing voices are heard through megaphones .?.?. an angry outcry clouds the sky of Yeouido,” Nam reads.

As the standoff between police and demonstrators intensifies, policemen also become emotional.

That’s when Nam takes action. After the police officers return to the office, he reads a poem to help his colleagues relax.

“A policeman’s job is to protect hurt people at the rally and to respect law and order,” Nam said. “This poem helps me to retain my balance.”

The 55-year-old veteran policeman entered the world of poetry four years ago after getting his first poem published in a monthly poetry magazine.

He has written 40 poems and most of them are lyric poems.

Nam, who was raised in the small town of Yangju, Gyeonggi, writes about the nature he experienced in his hometown.

His discovered his poetic voice in 2009 when he was promoted and assigned to head a police precinct in Boryeong, South Chungcheong.

“The memory of planting seeds for sesame and peppers with my mother who had stage IV lung cancer was the source of my poetic material,” Nam said.

“Lyric poems brought me pure thoughts, devotion and the importance of security,” he recalled.

In 2010, he cut the number of deaths resulting from traffic accidents by 60 percent in Boryeong.

When he was assigned to oversee the Pyeongtaek police precinct in 2011, he went door-to-door in his district and handed business cards to the residents.

Go’s poems are closely related to his work in the field as well.

In poems, he uses the straightforward and direct language detectives frequently use.

“I think a poem is like having a dialogue with an exhausted soul who messes with drugs not long after they made a promise to never take drugs,” Go said.

In the police notebook he carries around at all times, he depicts drug addicts with poetry.

In a poem named “White Powder,” Go depicted the process of how drug addicts get high on methamphetamine.

“There was a drug addict who picked up dirt because he thought it was methamphetamine,” Go said. “I even met a drug addict who turned himself in to the police in Busan after having auditory hallucinations of guns going off.”

“Just like writing poetry, an investigation is also a process of creation as we dig up clues.”