The 29-year-old Korean of the Emilio de Villota team charged ahead after the first lap and kept the lead throughout the race, finishing 15 laps in 30:18.735, fast enough to win the Copa class at the ninth round of the 2013 European F3 Open at Silverstone Circuit.

In the qualification race on Friday, Lim came in second, next to Richard Gonda of Slovakia. 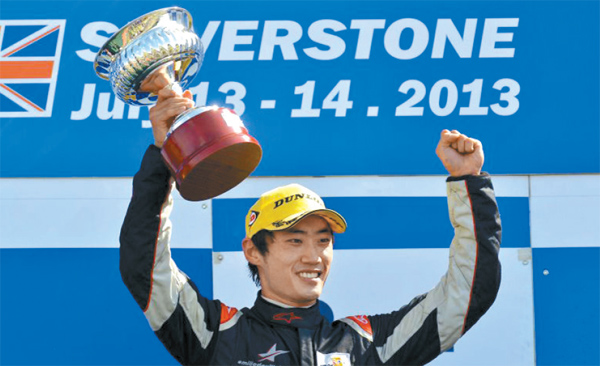 Lim Che-one celebrates after winning the Copa Class of the ninth round of the 2013 European F3 Open, held at Circuit Silverstone, England, Saturday. Courtesy of European F3 Open

Lim, whose schooling at Seoul National University has helped build his reputation in Korea, accomplished the feat just three months after his European F3 debut. He finished runner-up at the season-opening event at Circuit Paul Ricard in France on April 27, making headlines as the first Korean national to stand on the podium at an F3 event.

The European F3 Open is a stepping stone for the Formula One. Drivers who excel at F3 can earn a spot in the upper tier of Grand Prix 2 and then race their way up to F1. Some talented drivers have even advanced directly from F3 to F1.

“I am happy about my first win in F3,” Lim was quoted as saying by Korean media outlets after winning the race. “Those who support me just for my potential, thank you all.”

Lim said that he will try to live up to the fans’ support by winning back-to-back titles at the 10th round of the season.

Lim, who enrolled at SNU in 2004 in architectural engineering but then transferred to mechanical engineering due to his interest in cars, made his debut as a racer in the CJ Super Race, a Korean racing championship, in 2010. He won the champion title in his debut season and received the Korea Motor Sports’ Rookie of the Year in that year.

He moved to Japan in 2011 to race Formula cars and won the Super FJ Okayama Series in October 2011, surprising racing fans in Japan, which has one of the longest racing histories in Asia. Local experts on car racing said - and Lim agreed - that his knowledge of mechanical engineering helped him master his driving skills.

He finished third in the F4 in Japan last year. He also built a career at Formula Challenge Japan and the Asian Formula Renault Challenge in China before trying his luck in Europe.

In a previous interview with the Ilgan Sports, a JoongAng Ilbo affiliate, Lim said that his ultimate dream was to become an F1 driver. Even if he fails at becoming an F1 driver, he said he wants to coach Korea’s F1 team in the future.

Korea has hosted an F1 race every year since 2010 in Yeongam, South Jeolla.