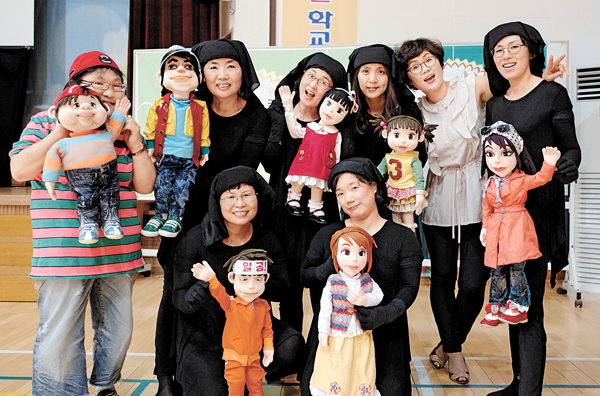 At Yakmok Elementary School in Uiryeong County, North Gyeongsang, 400 students in an auditorium are engrossed in a puppet play. Behind the puppets, members of the play are sweating heavily. Despite the torrid summer heat, the members have all dressed in long black clothes and bandanas in order to ensure that the children only see the puppets. After the performance, the children form long lines to take pictures with the performers. It is as if they are taking pictures with famous celebrities.

“Every child has a small dream when he or she is little. Contributing talent helps fulfill those dreams little by little. It’s a very attractive idea. It is worthwhile to see the children enjoy themselves,” said Ju Seok-hee, a representative of Story Tree.

Story Tree is a volunteer organization that has been touring schools in the county for 10 years, presenting puppet shows on various topics. While the schedule is not consistent, the group puts on original shows every two to three months. A group of eight women manage scripts, choreography and directing to produce a show that runs well over 40 minutes.

Five of the eight current members were the founders of Story Tree, who agreed on a common cause 10 years ago. After learning about storytelling at a local cultural education center, they set out to show entertaining performances to children in rural communities who can easily be culturally alienated.

“When I was a child, it was my dream to become a writer. Although the work can be tiring, it’s absolutely worth it to see the children be happy through the plays that I write,” said Hwang In-jung, one of the founding members in charge of scripts and also a Korean language professor.

Park Bok-hee, who joined Story Tree last year, takes care of her husband, who suffers from a brain tumor, as well as her two daughters in college. In addition, she works as a Korean instructor in the afternoon and works nighttime shifts at a bathhouse. Other members say that although Park is in a difficult situation, she is always smiling and working hard. She is a highly valued member because of her van that is able to carry set equipment.

It is not easy for women with family and career obligations to get together several times a week to practice, especially for as long as 10 years. “It is all due to the happiness that we receive from the children. When we see children enjoy the shows, we can’t help but laugh,” said Ok Myeong-seon, the eldest in the group and an essay instructor.