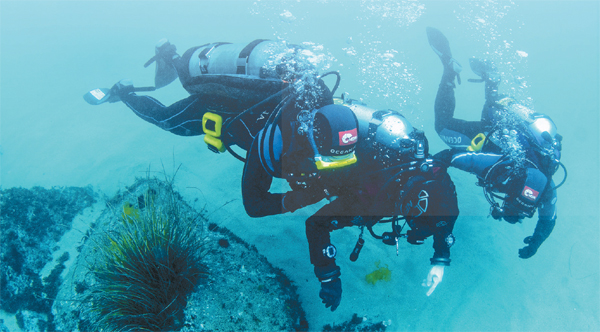 Amateur divers explore the world underwater for the first time in their lives at Agajjam near Sacheon Port in Gangneung, Gangwon. [JoongAng Ilbo]

This is usually what people say after scuba diving for the first time in their lives. Scuba diving is more than just gazing at the fish and seaweed. There are many unique and adventurous diving experiences, during which people explore artificially-made fish shelters, wrecked ships or underwater caves.

With the summer in full swing, the JoongAng Ilbo and Nepa, an outdoor brand, have decided to operate a short-term “school” on various outdoor sports starting this month. About 20 million Koreans are known to enjoy an outdoor sport of some sort every year. And first up is scuba diving. 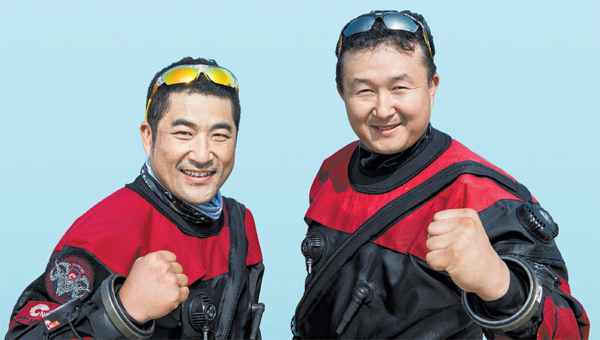 “Would you go diving with us?”

Not long after we put up a posting on Nepa’s Web site, about 200 people applied. Of them, we selected eight. Most of the finalists had never explored the world under the sea. Only two of them had an entry-level scuba certification known as “Open Water Diver” that provides people with the fundamental knowledge and skills to safely scuba dive in open water.

But we will be in good hands; Park Jae-seok, who has dived to 152 meters in the Philippines, and Park Heon-yeong, a professional diver, will help the amateurs.

We gathered at the Sacheon Port in Gangneung, Gangwon, which is on the eastern side of the Korean Peninsula. Our goal was to explore the sea about 10 minutes away from Sacheon Port and, if the conditions underwater allow it and the divers can handle it, to explore an underwater cave nearby.

Since it would be hard for first-timers to carry out both missions, it was decided that only Kim Ok-jin and Sin Jong-mok - the two with the Open Water Diver certification - would be going to the sea and the cave.

“Exploring the underwater cave is worth it,” Park Jae-seok said. “If you have certification, I strongly advise that you try it. It is totally different from just looking at fish.”

During the two-hour education session on the ground, we learned about the equipment. In fact, learning about scuba-diving equipment is not easy. Instructor Yun Hyeong-jun tried to make it as easy as he could.

Next, we tried actual diving. Those going to the underwater cave must carry what’s called double tanks, which consist of two air containers. They weigh somewhere between 50 to 60 kilograms, which is quite heavy for a female diver. Park Heon-yeong said “It’s something divers must bear,” which made Kim Ok-jin unable to complain.

In fact, according to Park, scuba diving requires qualities like sensitivity and meticulousness in order to operate all the equipment well and in a calm manner, and in that sense female divers tend to learn faster.

We were able to spot several female divers at Sacheon Port during our education session. The 30-year-old Kim also successfully dived and navigated around the Sacheon Port carrying the tanks that weigh more than she does. Come tomorrow, she and Sin would be exploring an underwater cave. 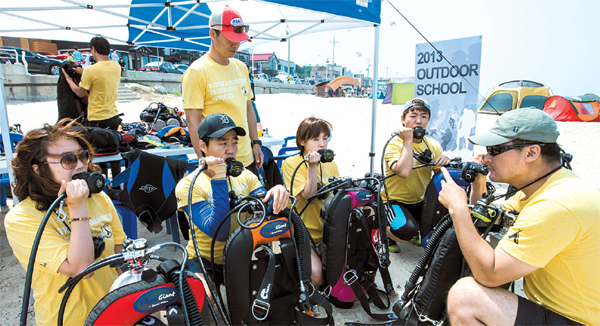 Instructor Yun Hyeong-jun shows divers how to remove water from their goggles.

The next day at 8 a.m., we shipped out to an area called Agajjam - which is five minutes from Sacheon Port. We were all excited and nervous: Excited at the idea that we will finally be putting into practice what we’ve learned in classes and exploring the sea world, and nervous at the idea of stepping foot into a world we’ve never experienced, possibly very dark and filled with unknown dangers.

“Although it’s over 30 degrees Celsius [86 Fahrenheit] outside, the water off Korea’s east coast is still very cold,” Park Jae-seok told the divers on the boat. “We will explore Agajjam for about 30 minutes. After that, the final mission for all of us is to gather at the seabed of Agajjam [which is 13 meters (42.6 feet) underwater] and to take a group photo there. Good luck, everyone!” We saved the exploration of the underwater cave for the afternoon.

There was a big difference between learning scuba diving in theory and actually doing it in the field.

We went down with the rope connected to a buoy on the surface of the water, but keeping our balance wasn’t easy. Maintaining neutral buoyancy was the first important task for any amateur diver. An object that has neutral buoyancy will neither sink nor rise. And having neutral buoyancy can only happen when all the right ingredients are there, like the air in the buoyancy jacket and the body’s balance.

Kim Ok-jin and Sin Jong-mok seemed to be having the most difficult time, carrying double tanks. Making things worse, as amateur divers paddled their feet wearing flippers very close to the seabed, they kicked up sand and visibility got bad. As a result, not all were able to complete the mission of holding the banner and taking a group photo at the seabed. Kim and Sin, exhausted after using up one of the two air containers, gave up on exploring the cave.

We just had to settle with the fact that not one of participants fell behind and tap each other on the shoulder for all the efforts.

Before diving, Park Jae-seok explains things that divers should remember while they are underwater.

Another instructor, Jeong Mun-jin, said there is a big difference between the underwater education session on the first day and the actual scuba diving on the second day. “When people go into the pitch-dark sea for the first time, their pupils waver and they lose focus,” he said.

There is also a difference in the underwater climate between overseas and Korea.

“An increased number of Koreans these days get the Open Water Diver certifications from countries like the Philippines, but the underwater climate between the Philippines and Korea are completely different,” Jeong said. “That is why I recommend that even those who have obtained certifications from overseas go through an organized education session in Korea before diving into the waters here.”

The certification levels for scuba divers start from Open Water Diver, then to Advanced Scuba Diver, and finally to Dive Master. Although veteran divers say the more time you spend under the sea the better you get, they also say amateur divers should try out what they’ve learned at swimming pools before heading out to sea. Pools with depths of five meters are the most desirable.

Beach resorts where scuba diving is taught have also popped up here and there in Korea in recent years, similar to those in some Southeast Asian countries. Bahama Dive Resort in Sacheon Port - where Park Jae-seok and Park Heon-yeong teach - is one example. As the boat carrying us reached the land, participants began to relax and share their feelings. “I wanted to try diving ever since I watched the film, ‘The Big Blue,’ ” said 29-year-old Park Du-yeong.

“I now want to obtain certification and try out more adventurous courses, like the underwater cave,” said 30-year-old Lee Eun-hye.

Wrapping up the two-day “school,” Park Jae-seok said, “Everyone exceeded my expectations. I think it was because everyone was so focused and committed. Once you get more familiar with Korea’s underwater environment, you would be able to take part in more adventurous diving experiences.”