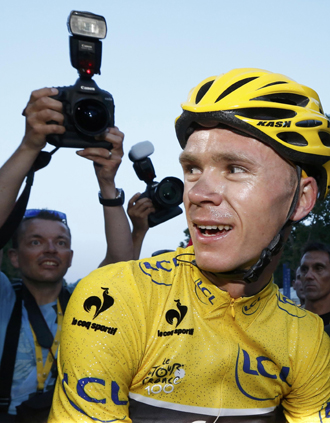 PARIS - I won’t let you down like Lance Armstrong. This Tour de France champion is for real.

That, in so many words, is the promise Chris Froome made as the newest winner of cycling’s showcase race so badly hurt over the years by riders who doped to win it.

Because of their deceit, Froome faced a barrage of questions as he dominated rivals over three weeks of racing, all centered on the same key concern: Can we believe in you?

Yes, he insisted. The sport is changing, he argued. He handled the scrutiny politely and adroitly. He said he understood the skepticism. And on the podium in Paris, his wiry frame wrapped in his canary yellow jersey, Froome asked the guardians of the 110-year-old race and all those who love it to trust him.

“This is one yellow jersey that will stand the test of time,” he said.

In two years, Britain has had two different winners: Bradley Wiggins in 2012 and now Froome, a cooler, calmer, more understated but no less determined character than his Sky teammate with famous sideburns.

Froome rode into Paris in style: Riders pedaled up to him to offer congratulations; he sipped from a flute of champagne; a Tour organizer stuck an arm from his car window to shake Froome’s hand. He dedicated his victory to his late mother, Jane, who died in 2008.

“Without her encouragement to follow my dreams I would probably be at home watching on TV,” he said.

Froome took the race lead on Stage 8 in the Pyrenees, never relinquished it and vigorously fended off rivals whose concerted challenges turned this 100th Tour into a thriller. Froome and his Sky teammates linked arms as they rode for the line.

“This is a beautiful country with the finest annual sporting event on the planet. To win the 100th edition is an honor beyond any I’ve dreamed,” he said.

Five-time winners Eddy Merckx, Bernard Hinault and Miguel Indurain joined Froome on the podium. Missing, of course, was Armstrong. Stripping the serial doper of his seven wins tore a hole in the Tour’s roll of honor as large as that left by World War II, when the race didn’t take place from 1940-46.

None of the 100th edition’s podium finishers - Froome, Nairo Quintana and Joaquim Rodriguez - have ever failed a drug test or been directly implicated in any of cycling’s litany of doping scandals. That is an encouraging and notable departure both from the Armstrong era and many other Tour podiums before and since.

“In a way, I’m glad that I’ve had to face those questions. That after all the revelations last year and just the tarnished history over the last decade, all that’s been channeled toward me now,” Froome said. “I feel I’ve been able to deal with it reasonably well throughout this Tour, and hopefully that’s sent a strong message to the cycling world that the sport has changed - and it really has.”

“The peloton’s standing together, the riders are united and it’s not going to be accepted anymore.”

The spectacular nighttime ceremonies, with the Eiffel Tower in glittering lights and the Arc de Triomphe used as a screen for a flashing lightshow, capped what has been a visually stunning Tour.

It started with a first-ever swing through Corsica, France’s so-called “island of beauty,” before veering through the Pyrenees to Brittany and then across France to the race’s crescendo in the Alps - 3,404 grueling kilometers (2,115 miles) in total.

His winning margin of 4 minutes, 20 seconds was the largest since 1997, when Jan Ullrich - who has since admitted to doping - beat Richard Virenque - who also confessed to using performance-enhancers - by 9 minutes, 9 seconds.