Seoul metro to get 9 new lines

Seoul metro to get 9 new lines 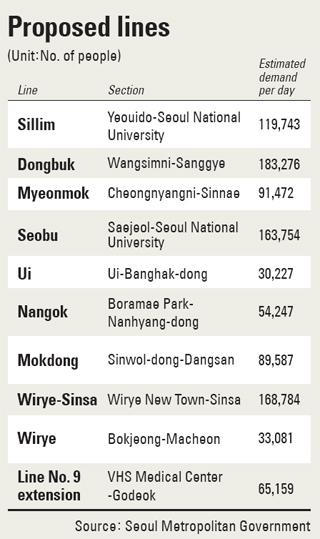 The Seoul Metropolitan Government announced yesterday that it will invest 8.5 trillion won ($7.58 billion) on nine new light rail and subway lines by 2025.

The new tracks, which will total 85.4 kilometers (53.1 miles), are to serve areas that are currently difficult to access by public transit.

An initiative to build seven new light rail lines was initiated in 2007. It was delayed for years for political and financial reasons, but now has been reborn as a nine-track plan. Two additional lines were added for Wirye New Town in Songpa District, southern Seoul.

Line No. 9 will be expanded, with a 3.8 kilometer section added between VHS Hospital and Godeok District.

When the initial plan was announced in 2007 by former Mayor Oh Se-hoon, he said that different fares would apply, but current Mayor Park Won-soon said yesterday that that would only benefit private investors.

“We can’t put too much of a burden on the citizens because these lines are part of the city government’s welfare programs,” Mayor Park said in a press briefing at City Hall.

Private investors are saying that the city should cover the deficit that could stem from the low fares. “We forecast that we’ll need to provide about 3.5 to 4.5 billion won in support to private investors per year,” said Yoon Jun-byeong, director of the city government’s Urban Transportation Department. “Because these lines will be completed at different times, the city government won’t have any trouble supporting the investors.”

As of this month, only the Myeonmok and Seobu lines have attracted private investors. The city government will submit the plan to the Ministry of Land, Infrastructure and Transport by the end of September. It said the ministry will likely approve the plan next year.