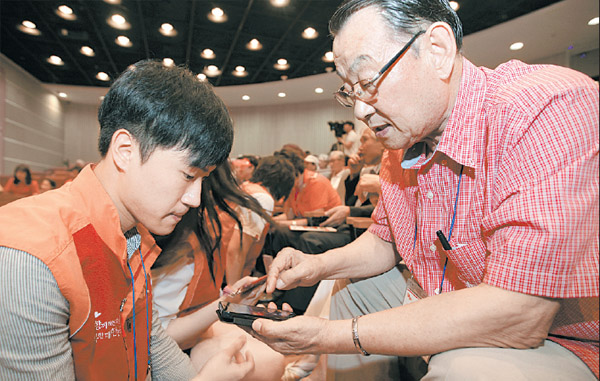 SK Telecom leads the way in enhancing public telecommunication services and cultural change by using advanced information communication technology (ICT). It targets results such as job creation, reduction of the information gap between generations and social groups, the construction of social security networks, donations and volunteering.

Such efforts are being recognized overseas. Korea’s most popular telecommunication carrier was nominated by the Dow Jones Sustainability Index World as a global standard of sustainable management for the last five consecutive years - the first Asian conglomerate to achieve this - and for three years for excellence in management achievements.

As the nation’s No.1 carrier, SKT strives to improve society with creativity, eventually linking this to business profit. The focus is on becoming a catalyst that pioneers a culture where donation is a part of daily life.

Another initiative is on spreading ICT to all society members, ensuring no one is isolated from the benefits of technology. The most well-known program is the SKT IT challenge competition for youths with disabilities, launched in 1999. Teenagers with disabilities show off their IT skills, which encourages them to nurture their dreams and create their own future. A significant number of participants have gone on to become IT professionals.

In 2011, the carrier developed an application that reads books to visually impaired smartphone users. A first in the industry, SKT employees voluntarily voice recorded books to invigorate the app with more content.

SKT has done their best to embrace other technologically isolated people, including seniors and North Korean defectors. Ever since 2007, the company’s student volunteer group has tutored almost 9,000 seniors one on one by using regular cell phones, upgraded to smartphones in 2011. The same has done at Hanawon since 2008, a North Korean defector resettlement center run by the Ministry of Unification.

The tryout is being praised as a great example of a creative economy. SKT has begun expanding the same model with Incheon Shingi Market in May 2013.