Signs indicate the economy’s on the mend

Signs indicate the economy’s on the mend 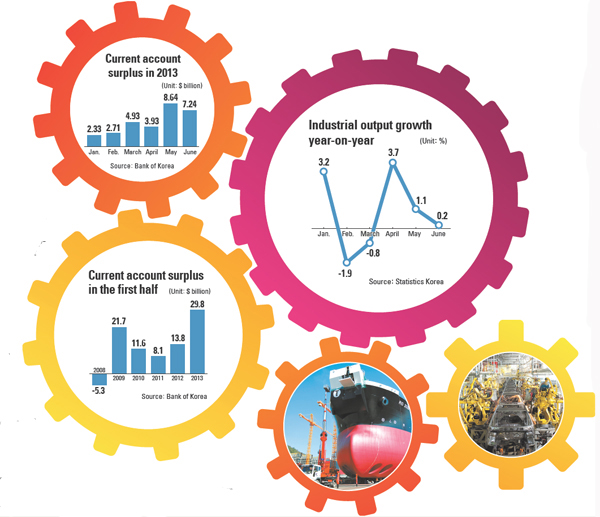 Indicators released yesterday show that the Korean economy is slowly bouncing back.

The current account balance surplus in the first half reached a record, edging close to $30 billion, while industrial output in June rebounded compared to the previous month.

According to the Bank of Korea, the current account surplus in the first six months of the year was $29.8 billion, easily outdistancing the previous record of $22.1 billion in the first half of 1998. If the account surplus continues its current course, Korea could easily reach its annual target of $53 billion.

“In the first half, exports grew 0.6 percent year-on-year even though the global economy struggled,” said Jung Young-taek, head of the statistics office at the central bank. “As the surplus exceeded our first half target [of $28 billion], unless there is an unexpected turn of events, we are confident we will reach our target by year’s end.”

June’s current account surplus was $7.2 billion. Although that is smaller than the record of $8.6 billion posted in May, June’s surplus was the second-largest since data has been compiled.

The goods account in June tumbled nearly 45 percent to $5 billion compared to the $7.3 billion surplus registered in May.

However, it still posted a surplus as its year-on-year decline was less acute than that of imports import. Exports in June were 3.1 percent less than a year ago at $45.4 billion, whereas imports shrank 3.4 percent year-on-year to $40.3 billion.

Automobiles, one of the country’s key exports, were unchanged from a year ago.

Exports to China slowed sharply after growing 16.5 percent year-on-year in May to $12.5 billion.

In June, shipments were down 5.3 percent to $11.4 billion against the backdrop of growing concerns that China’s slowing economy could dampen Korea’s economic growth in the second half of the year.

Shipments to Southeast Asia sank from a 0.6 percent year-on-year increase in May to a nearly 2 percent decline in June.

Meanwhile, Korea’s industrial output is showing gradual improvement on a quarterly basis, raising expectations for economic recovery in the second half of the year.

Korea’s industrial output is a significant indicator of exports, as some of the world’s leading products including smartphones, ships and cars are manufactured here.

According to Statistics Korea yesterday, overall industrial production grew 0.3 percent in the second quarter, up from 0.1 percent in the first quarter.

Except for manufacturing, the service, public administration and construction sectors saw output increase during the second quarter.

Declines in facility investment slowed as the growth rate posted minus 1.6 percent in the second quarter, up from minus 4.5 percent in the previous quarter.

Private consumption also improved as the retail sales index rose from minus 1.2 percent to 0.4 percent.

However, the manufacturing industry, whose output is considered crucial to the nation’s GDP growth, fell 1.4 percent in production in the second quarter, compared to the previous three months.

In June, manufacturing output rebounded 0.4 percent after dropping 0.1 percent in May, owing to increased production of automobiles and petrochemical products.

The news on the current account surplus and the mild recovery in industrial output came a week after the central bank announced that Korea’s economic quarter-on-quarter growth was 1.1 percent from April through June, the first time it has exceeded 1 percent in two years.

There have been mixed reviews on whether Korea can maintain momentum and achieve its 2.7 percent growth target for the year.

The Ministry of Strategy and Finance viewed the rebound in industrial output positively, vowing to achieve the government’s growth target.

“Along with proactive macroeconomic policies, the government will focus on revitalizing the economy through the investment and export promotion plan as scheduled in the second half of the year,” said Lee Hyung-il, director at the economic policy bureau of the ministry.