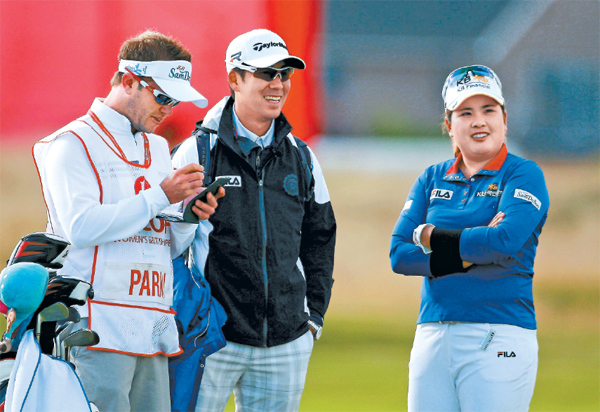 Park In-bee, right, looks at the Old Course of St. Andrews, Scotland, yesterday, before the beginning of the 2013 Ricoh Women’s British Open. [NEWS1]

Those who nicknamed Park In-bee the “silent assassin” may have seen in her a lack of charisma instead of the other qualities a star player can display by remaining remarkably consistent under pressure.

Even after a win, she keeps it cool and fades into the background as if the spotlight was not on her.

Park, 25, now aiming to become an undisputed golfing great at the British Open to be held in Scotland this week, may be a shy girl just like many other top golfers from Korea, where shyness is not regarded as a vice, if not a strongly recommended virtue.

But, her invisibility is attributed to modesty and thoughtfulness. She said she did not want to hurt the other players’ feelings with wild victory celebrations.

“When I won the Wegmans LPGA Championship at the sudden-death playoff, I was so glad that I felt my hands were raised in spite of myself,” Park told Ilgan Sports in Jeju last week, recalling her second straight major win of the season over Catriona Matthew of Scotland in June.

“But, then, my eyes met those of Catriona Matthew and I lowered my hands.”

Park extended her winning streak at majors to three, clinching a four-stroke win over her compatriot and friend, Kim In-kyung, at the U.S. Women’s Open. This time she was more exuberant about the win.

“During the U.S. Women’s Open, In-kyung was far away from where I stood [far enough so she would not see me], so I could lift up my arms after winning it,” Park said.

“I don’t want to do a winning ceremony just for the sake of showing it, but I guess I am getting more natural in doing that,” she said.

Her second U.S. Open victory made her only the second person to win three first three majors of a season in LPGA history, and her hard-to-ignore status on the Tour drew attention from many local media outlets, who previously were stingy in covering a player with ordinary looks.

Such a change in the way she was treated was confirmed last week, when she returned to Korea for a family reunion and a sponsorship event.

Her grandfather, Park Byung-joon, celebrated his 81st birthday on July 23. After attending it, she flew to Jeju to attend a sponsorship event and a fan meeting at the southern resort island city. Wherever she went, she was surrounded by reporters and fans. Wherever she went in Jeju, people recognized her.

“I was surprised to find myself in a situation that I did not expect I would be in,” Park said.

But, even after people changed their attitude toward her, she did not change her attitude about herself. Park said that she feels comfortable about herself as she is, not as a star.

Upon arriving at Incheon International Airport, she was swarmed by a barrage of camera flashes. She said she felt scared by it. “To be frank, I don’t want to be popular,” Park said. “Popularity comes with more discomfort in the life of an athlete, I think.”

The success has not spoiled her, at least for now. Park has earned $2,234,844 in winning money this season. She said she does not have sufficient time to practice golf, so finding the time to spend the money is a luxury, she said.

“In-bee does not know many luxury brands,” her mother, Kim Sung-ja, said. “She even does not carry a purse along with her. Sometimes, I feel sorry for her when she does nothing but golf.”

She remembers her humble past. Winning her maiden LPGA title at the U.S. Open in 2008, she went into a long slump until she won the Evian Masters in July 2012.

During the difficult time, Jeju Samdasoo, a local bottle water manufacturer, was one of few sponsoring companies providing help for her, although it was a small-scale partnership. Park split her busy schedule to attend the event in Jeju hosted by Samdasoo. It was an event scheduled one and a half months ago, and she did not want to disappoint them, she said.

Before the season, her goal was winning once. Now, having secured six wins midway through the season, she said she feels “happier a little bit more than early this year.”

She may feel happier if she wins the British Open, which will make her the only person in golf, male or female, to win the first four majors of a season - a calendar Grand Slam.

She said her goal is to become a happy golfer, rather than a successful one.

“Not long after I became the world’s No.1 golfer, I realized that it was not an easy spot to dwell on. But, you can’t avoid being pressured, so I want to get used to it. I think I am getting less aware of it, thanks in part to experience,” she said.

She said that her four-year win drought taught her a valuable lesson. “When I went through a slump for four years since the U.S. Women’s Open in 2008, I abandoned such goals as entering the Hall of Fame,” she said. “I set a goal of living happily and that is still my goal.

“My formula for happiness is simple. If my family lives in peace, and people around me become happy because of me, that’s happiness for me.”