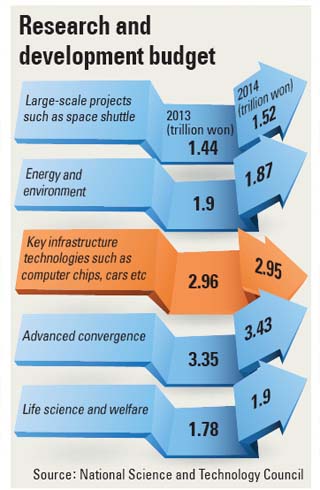 The government has decided to invest 11.7 trillion won ($10.4 billion) in research and development, of which 3.9 trillion won will be allocated to help realize the Park Geun-hye administration’s ambitious “creative economy” initiative.

While the overall budget for R&D next year is a 2.2 percent increase from this year, the amount set aside for “creative economy” is up 5.9 percent.

Even within the creative economy budget, the government has allocated 1.1 trillion won to not only support the competitiveness of start-ups and small and midsize companies, but also develop information communication technology and software convergence. That is nearly 27 percent more than this year’s budget.

Additionally, the budget for public safety research and development, such as protection of personal information, as well as natural disasters and social problems such as food and medical safety have increased 16.2 percent from this year’s budget to 640.7 billion won.

Next year’s budget on developing space shuttle technology has increased 53 percent from this year’s 122.7 billion won to 187.7 billion won, while the budget for creating a science business belt increased 42.5 percent to 149.7 billion won.

The government has cut 602 billion won by streamlining the budget structure and reducing support for conglomerates.

The government also decided to become more lenient on the performances of R&D projects.

It said even if a government-led R&D business fails to reach its goal, there will be opportunities to try again.

Previously, the research department had to refund part of the budget or was excluded from taking part in other projects when it failed to reach its target.

As a result, there have been criticisms that such procedures caused researchers to refrain from bold initiatives

The budget for next year’s research and development was decided during a National Science and Technology Council meeting led by Prime Minister Chung Hong-won on Friday, the government said yesterday.

The council consists of 23 members, 13 from related government departments including the Future Planning Ministry, as well as 10 civilians. The prime minister chairs the council.

“Until now we were able to achieve a rapid economic development as a ‘fast follower’ by copying and improving technologies in developed countries,” said Chung. “However, we have now reached a limit. It is important for us to become a ‘first mover’ who dominates the lead in the global market by developing new areas first.”