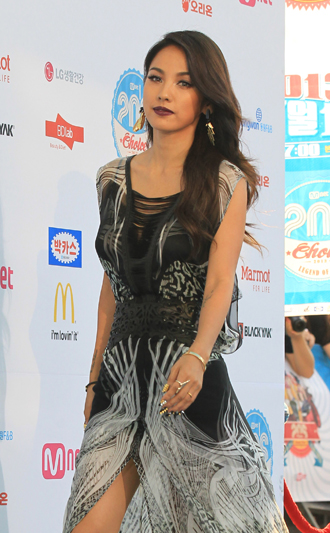 Singer Lee Hyori said she felt sorry for her future parents-in-law on a social network service on Sunday after her mother-in-law-to-be sent her a text message telling her they are being harassed by local reporters asking for interviews.

“I got a long text message from the mother of my boyfriend,” said Lee on her Twitter.

“Reporters come almost everyday, waiting for hours until they agree to an interview. They said they feel bad to ignore them but don’t want be interviewed as it may harm us in some way.” She then added that her future mother-in-law has said she wants to quit running her business and move somewhere quieter.

“I feel so burdened. Please stop,” she asked.

Lee, who has been in a romantic relationship with composer Lee Sang-soon since 2011, recently announced her plan to get married next month.

Ever since she has said that she doesn’t want a fancy wedding and would rather have a meal with both sets of parents and close family members instead, many have been questioning if the parents are supporting the couple’s decision to avoid a big and luxurious wedding.