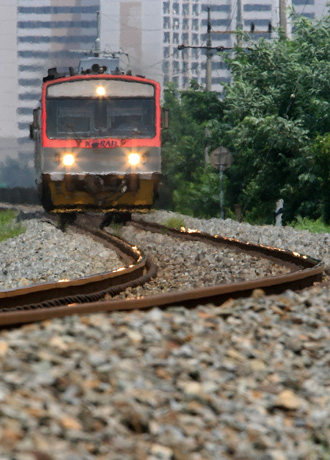 A train bound from Gyeongsan City, North Gyeongsang presses through the heat as it heads to Dongdaegu Station on Sunday. Daegu’s high for the day was 34.7 degrees Celsius (94.5 Fahrenheit). By Gong Jeong-sik

DAEGU - When the temperature in Daegu hit 34.5 degrees Celsius (94.1 Fahrenheit) at 3 p.m. Saturday, about 50 seniors aged between 60 and 80 were fanning themselves on benches in the Banwol-dang underground shopping arcade in the Jung District. It’s a favorite spot for the elderly because its normally nicely air conditioned.

But this year, the arcade is so packed with people trying to avoid the heat, the air conditioning system can’t keep up, and everyone is hot, sweaty and irritable.

“I come here every day,” Park Heon-yong, 71, told the JoongAng Ilbo, “because my house is too hot.”

Daegu, which is the hottest Korean city during the summer, has been suffering through a heat wave with temperatures of 30 degrees Celsius or higher for more than a month.

According to the Daegu weather agency, the mercury hit 33 degrees Celsius or higher on 24 days in July. That’s the third most since the country started meteorological observations in 1909.

Daegu is also having to endure tropical nights, the Korean term for a night in which the temperature remains above 25 degrees Celsius. Daegu had 18 such nights this July. There were 20 in July in 1994 and 2008.

The Daegu weather agency said the heat is a result of the seasonal rain front not moving to the southern regions of the country because of a strong North Pacific anticyclone.

The agency said the city had a total of 249.3 millimeters (9.8 inches) of rain last month, an increase of 11 percent compared to last July, but most of the precipitation came before July 8. Only 15.8 millimeters came between July 8 and 29.

Because the city is located in a basin and is surrounded by mountains, the heat gets trapped.

“People in Daegu might have felt that this summer is hotter than any other because about 190.5 millimeters of July’s rain came on July 4 and 5 and most of the other days were hot and humid,” said Sohn Hee-jeong, an official with the Daegu weather agency.

People are avoiding the city’s parks because they’re not much cooler than downtown.

During less brutal summers, Gyeongsang-gamyeong Park is a popular place for seniors to hang out.

The Daegu city government planted a total of 10 million trees from 1996 to 2006 to take the edge off the heat the city experiences, investing about 350 billion won ($314 million).

“With the shade they produce, trees prevent ground surfaces from absorbing heat,” said Daegu city government official Kang Jeom-mun. “But this year’s summer was just too hot and humid.”

Sales of air-conditioners at the Daegu branch of Lotte Department Store are triple those of last July.

To avoid heatstroke, the city government has ordered workers at an urban railway construction site to take turns resting from 2 p.m. to 5 p.m. every day.

“The peak of the summer has begun as the monsoon season ended last week,” said Heo Jin-ho, spokesman of the Korea Meteorological Administration.