Daegu, Gyeongsang get hit by bolts from blue

Daegu, Gyeongsang get hit by bolts from blue 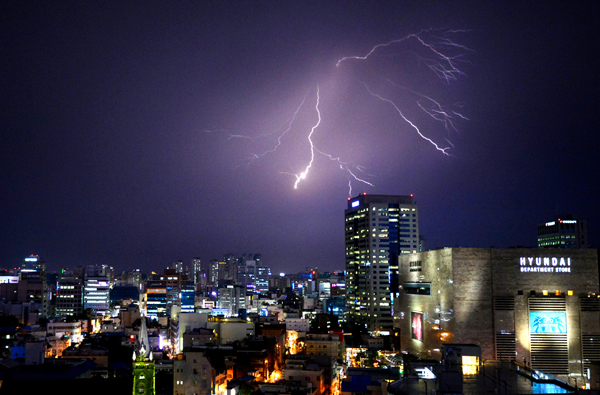 Lightning flashes across the Daegu skyline Tuesday evening amid heavy rainfall and sweltering heat and humidity. Provided by Maeil Shinmun

Although the monsoon season is technically over, Daegu and the North Gyeongsang area were struck by raging thunderstorms Tuesday leading to fires from lightning strikes and other storm-related accidents.

Ominous clouds covered the North Gyeongsang region and rainfall started a little before 5 p.m. in Daegu Tuesday, interspersed with hail half an hour later. In the North Gyeongsang region, some 55.5 millimeters (2.2 inches) per hour of rain fell in conjunction with blinding flashes of lightning and long rumbles of thunder. The frequency of lightning strikes in the region was an average of 72 per minute.

Over a period of three-and-a-half hours in the North Gyeongsang region Tuesday evening, there were 14,374 lightning strikes, according to the Korea Meteorological Administration.

There were over 20 reports of gas stations, telephone poles, farms and even broadcasting transmitters catching fire from lightning strikes.

The Daegu Fire Department said that in Nowon-dong in northern Daegu, one gas station caught fire at 6:46 p.m. Though the damage was minimal, it was a potentially dangerous situation that could have led to an explosion. Four residences caught fire.

In other words, in just three hours on Tuesday, the lightning strikes reached 70 percent of the strikes in North Gyeongsang for the entire previous year.

In that same period Tuesday, there were also 1,059 lightning strikes in Seoul, 655 in Busan, 247 in Gwangju, 582 in Daejeon and 839 on Jeju Island, a rare nationwide phenomenon.

The strike count was made by the KMA’s nationwide lightning detection system.

The phenomenon - literally bolts out of the blue - was attributed to the sweltering heat and humidity in the Gyeongsang region, with temperature remaining over 33 degrees Celsius ( 91.4 Fahrenheit) for days. Water vapor, which plays a key role in producing thunderstorms in the atmosphere, rose up to 10 kilometers (6.2 miles) into the sky.

“The mercury reached a high of 36 degrees Celsius that afternoon when the lightning struck,” a Daegu meteorologist said, “which is a rare situation.”

The Daegu Regional Meteorological Administration said that aside from Aug. 2, this was the sixth day of temperatures surpassing 33 degrees Celsius. Likewise, there were 24 days last month with highs of over 33 degrees, the third highest number for the month of July since the administration started keeping records in 1909. The only two other Julys that had higher numbers were in 1942 and 1994.

“Even though the monsoon season is over, most regions throughout the nations will enter into a period of heat waves,” Heo Jin-ho, a KMA weather forecaster, said, “which means a continued environment that can lead to potentially life-threatening thunderstorms.”

Between 2005 and 2010, there were 17 deaths by lightning strikes and 48 injuries. The KMA advised that in case of thunderstorms, avoid taking shelter under trees or using umbrellas even if there is rainfall.