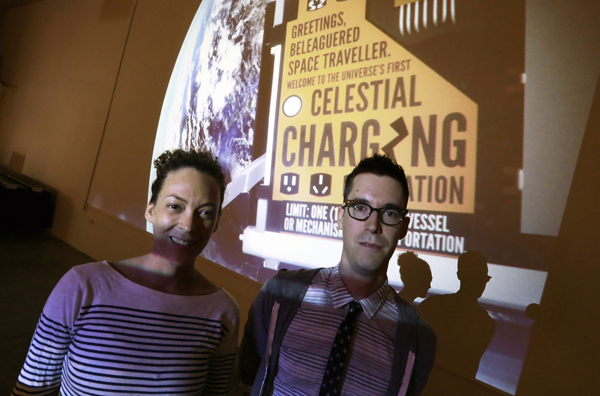 Amanda White and Jon Gibson pose with a projected image of their artwork that will be launched into space, at their studio in Los Angeles on July 31. [AP/NEWSIS]

LOS ANGELES - If aliens ever target Earth, Jon Gibson and Amanda White are counting on them having an appreciation for pop art and a sense of humor.

The duo created an elaborate, Andy Warhol-like design that has been etched into a satellite’s panel, transforming the spacecraft into a replica of an oversized electrical charging device.

“If someone is going to invade our planet, presumably they’re going to come in some sort of electronic, electricity-powered ship,” Gibson notes whimsically. “Maybe this will make them stop for a moment and say, ‘These guys are nice. We’re not going to destroy their planet.’”

Of the 1,000 or so functioning satellites that race around Earth every day, there isn’t one he knows of that also doubles as art, says veteran satellite builder Craig Clark, who runs the Scotland-based company preparing to launch this one from Kazakhstan on Oct. 29.

“No one else is crazy enough,” the CEO of Clyde Space Ltd. said during a recent phone interview from his office in Glasgow.

In building the small satellite that will monitor atmospheric conditions and send back photos and other information from 373 miles above Earth, he turned to Gibson and White and their popular iam8bit gallery in Los Angeles.

Their previous works include such esoteric efforts as overseeing a performance-art, paint-by-numbers project in 2010 that had 20,000 people affixing 2-inch-by-2-inch pixels to a wall to create a splashy, colorful mural for a conference of video game developers. A film of their efforts now resides in an art museum in Denver.

“Hopefully, by doing some kind of quirky things like this we’ll get some kids interested in space. Rather than going on to doing war, they can do something that helps change the world and makes it a better place,” said Clark, who received a Member of the British Empire medal for his work this year from Queen Elizabeth.

After some brainstorming, Gibson and White decided they wanted to do something directly related to space travel.

Using computer-generated imagery to make the satellite look like an electrical charger circling Earth turned out to be pretty easy. Putting such a design on a 2-pound, shoebox-sized gizmo filled with wires, antennas, sensors, solar panels and other sensitive equipment proved far more challenging.

First, something that would stand up to the wear and tear of being fired into space, then orbiting the Earth at 17,000 mph for 25 years had to be used. And it couldn’t be paint, either, which would deteriorate over time and give off gas that could fog the satellite’s camera.

So the images of computer buttons and a USB port, along with the words, “Greetings Beleaguered Space Traveler. Welcome to the Universe’s First Celestial Charging Station,” had to be etched right onto the satellite’s side.

That limited the use of color to the orange, black and white that the satellite’s panels really look like.

Still, Gibson and White managed to come up with a splashy, colorful and surprisingly realistic looking charger; one with white buttons and a USB port contained on a bright, meticulously detailed orange background. Unfortunately, it’s unlikely anybody on Earth will ever see the work once it enters orbit.

It’s etched onto the side of the satellite that will be pointing heavenward, Clark said, and even if it wasn’t, tracking something the size of a loaf of bread at that speed would be no easy task.

“But we’ll take plenty of pictures before we launch it,” he said with a laugh.

Whether the result will be absolutely the world’s first orbiting space work is open to some debate.

Harvard astrophysicist Jonathan McDowell notes that American Alan Bean, the fourth person to walk on the moon, is an accomplished painter. So is Russian Alexey Leonov, the first person to walk in space. Either might have doodled while they were up there.

He also noted that a South Korean artist’s home-built satellite was launched in February. There was no artful design attached to it, but it did contain lights that were supposed to illuminate in a colorful, artful pattern.