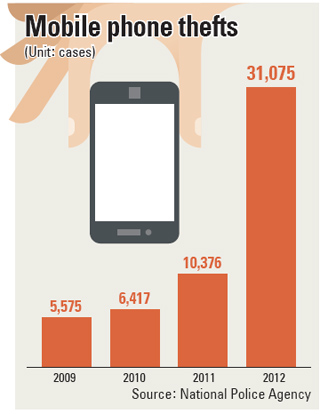 Amid rapidly rising mobile phone thefts, the government has come up with a package of measures to prevent or minimize damages including enabling users to remotely disable stolen or missing phones.

The Ministry of Science, ICT and Future Planning, announcing the comprehensive countermeasures yesterday, said it will require all mobile producers to embed software called “Kill Switch” in the operating system or firmware by the first half of next year.

Using the feature, the user may remotely lock, wipe and disable any smartphone or tablet without damaging the system. The device becomes useless even with a new SIM card. When the owner recovers the lost device, it can become operational again with the ID and password he or she registered, according to the ministry. The software also will be engineered to be recovered by the owner.

“With the spread of costly smartphones and illegalities incurred from them, users have been dealt huge financial damage,” said Lee Dong-hyung, head of the telecommunication policy bureau at the ministry. “Given that mobile phones also have credit card-like features, albeit with limits, consumers need to take particular caution when carrying them around,” The ceiling for mobile phone payments is 300,000 won ($269).

Smartphones have become a near asset-like entity costing almost 1 million won, more than double the old feature phones, and an immense number of people have switched to the high-end gadgets, so thefts are on the rise. Citing data from the National Police Agency, the ministry said the number of mobile phone thefts increased nearly sixfold from 5,575 in 2009 to 31,075 last year.

Once an owner reports a missing phone to the mobile carrier, the device is registered in the database and becomes unusable in Korea. But thieves can sell the machines to black markets including China. According to the Korea Customs Service, the number of apprehended smuggled mobile phones from Korea exploded from 131 in 2010 to 1,887 last year.

Some smartphone applications with similar functions are already available, but they cannot prevent those who have obtained the phone from initializing the phone to make it virtually empty and new.

Pantech, the nation’s smallest mobile phone producer, began baking its self-developed software called V Protection into all of its phones in February and said yesterday it would gradually improve the feature. The protection makes it possible for a user to remotely lock the phone or delete all data, but recovering the deleted data is not possible, according to a Pantech spokesman.

Introducing the new iOS 7 operating system in June at the Worldwide Developers Conference, Apple said it would upgrade its antitheft feature “Find My Phone” with “Activation Lock.” In Korea, Find My Phone partially operates. It does not show the location of the iPhone because the Korean government refuses to provide national map details to foreign device producers. With an upgrade to iOS 7 in September, Activation Lock will be available for Korean users, according to an Apple Korea spokesman, but the mapping problem won’t be improved.

The Korean government’s move follows the precedent set by the United States in June, where Samsung and other manufacturers met with New York Attorney General Erich Schneiderman to discuss the future of smartphone security and how to prevent device theft. Samsung said it would adopt software developed by a smaller Korean developer for the Killer Switch feature. The Science Ministry will also block the accounts of numbers used for calls or text messages to advertise illegal loan providers.