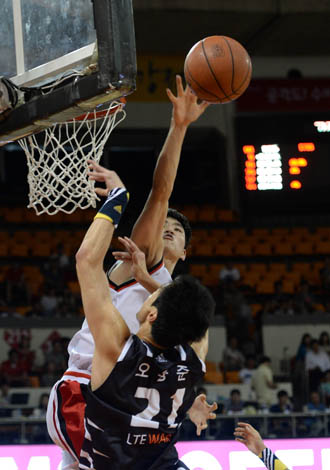 Kim Min-soo had a double-double, and the Seoul SK Knights rolled over the Incheon ET Land Elephants, 66-54, to reach the semifinals of the KB Pro-Am Basketball Championship at Jamsil Students’ Gymnasium in Seoul yesterday.

Later in the day, Korea University upset the Busan KT Sonicboom, 74-53, to become the first college team to reach the semifinals since the pro-am competition was launched last year. Kyung Hee University will seek to join its northeast Seoul college rival in the last four when it faces off against the Ulsan Mobis Phoebus in the quarterfinals today.

Kim, a 2-meter (6.6 foot) forward, led the Knights with 16 points and 13 rebounds, and Byeon Ki-hoon chipped in with 12 points, giving the Knights their second straight win after a 83-65 victory over Yonsei University last Thursday.

Led by Jung Young-sam, who scored 15 points, and Kim Sang-kyu, who added 12, the Yoo Do-hoon team trailed SK at 48-45 at the end of the third quarter. But the 2012 pro-am runner-up unraveled in the fourth quarter, scoring only nine points.

The Knights dominated the boards, 45-29.

SK’s next game is tomorrow, when it clashes with the winner of another quarterfinal game today between the Anyang KGC and the defending champ, Sangmu.

SK seized momentum early in the fourth quarter, thanks to three straight shots, including Park Sang-o’s 3-pointer. The game was fully tilted toward the Moon Kyung-eun side with 2:21 left, when Incheon’s Lee Hyun-ho committed an offensive foul and Kim Seon-hyeong converted a jump shot on the other end, making it 61-52. The Knights extended the lead on Byeon’s three-pointer.

It is already the farthest the Knights have advanced in the pro-am. Last year it crashed out of the second round with a 85-72 loss to the Phoebus, after sitting out key players to give them a break en route to winning the 2012-13 regular season. At this year’s event, held before the new season, unlike the previous event held in November, Moon’s team is at full strength. Center Choi Bu-gyeong grabbed 10 rebounds and scored six points against Incheon, while guard Kim Seon-hyeong had nine points and four assists.

“We are playing to win the title,” Moon said after yesterday’s game. The second-year coach, who missed a chance to win his first KBL champion title as coach with a 4-0 loss to the Phoebus in the KBL champion decider in April, said that he considers the pro-am a precursor to the new season.

Korea University led at the half, 46-32 and extended the lead to 26 points in the third. Cho Sung-min scored 16 points for KT.

Korea University will vie for a berth to the final with the winner of today’s game between Kyung Hee University and Phoebus.