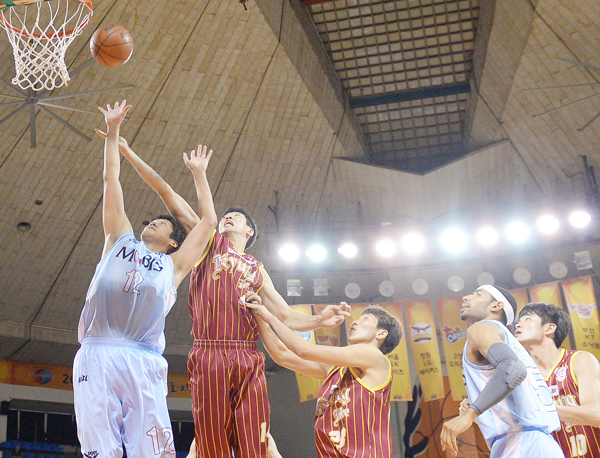 The Ulsan Mobis Phoebus mounted a fourth-quarter rally yesterday, snuffing out a remarkable run by Kyung Hee University and besting the university team 76-73 in the KB Pro-Am Basketball Championship in Seoul.

A 3-point attempt by Kyung Hee star Kim Min-goo in the closing seconds missed the mark, ending a tight-fought quarter-final game. Both semifinal games will feature a professional team versus amateurs.

Earlier in the day, the defending champion Sangmu became the second amateur side to make it into the semis with a 90-52 rout of the Anyang KGC. Sangmu will face off against the Seoul SK Knights today for a shot at the championship. Korea University, which upset the Busan KT Sonicboom 74-53 on Monday, will face the Phoebus in the other semifinal match today.

Kyung Hee, the three-time defending college champs, led the 2012 Korean Basketball League champs through three quarters. But the Phoebus staged a late comeback, outscoring the students 22 to 15 in the fourth.

Greg Stevenson, known better in Korea by his naturalized name, Moon Tae-young, had 28 points - 12 points in the fourth - and 12 rebounds. Ham Ji-hoon helped with 22 points and five rebounds.

It was the second-straight victory for Ulsan coach Yoo Jae-hak since he led Korea’s national team to its first World Cup berth in 16 years at the FIBA Asia Championship earlier this month.

Kim Min-goo, who was named an all-star at the Asia Championship, chipped in with 12 points against his national team coach Yoo. Another of Yoo’s pupil with the national team, 2.07-meter (6-foot-9) center Kim Jong-kyu had a double-double with 13 points and 13 rebounds for Kyung Hee, including an impressive fourth-quarter dunk.

The Sangmu, which are comprised of professionals playing as an alternative compulsory military service, had an impressive showing, completely shutting down the KGC for the last 6:05 of the opening quarter, going on a 20-0 run. They extended the lead by as much as 41 points in the fourth quarter and ruled the boards 45 to 27.

With victory looking assured early, the Sangmu coach Lee Hoon-jae gave all of his players a chance to play in preparation of the semifinal game against the Knights. Park Chan-hee helped beat his former team with five points, six rebounds and seven assists, while another former KGC player, Lee Jung-hyun, scored six points, three rebounds and four assists.

“SK has good domestic players and I think that we need to prepare well,” coach Lee said. “There are few areas in which our team is better. We need to be fully armed mentally.”