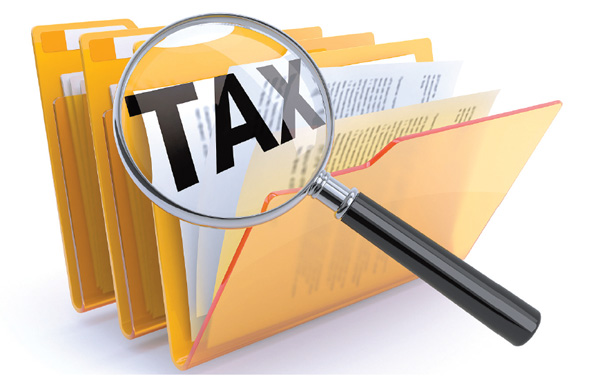 A company owner named Yoon received some bribes in the process of doing business overseas. Through such slush funds, he was able to purchase stock of a listed company outside Korea. When he died, he passed the stock holdings to his son, who never reported them to authorities, avoiding inheritance tax.

In another case, a businessman named Yoo opened an offshore bank account under the names of his employees in overseas branches. He then hid kickbacks that he received from overseas business partners under the assumed-identity account, never reporting his personal holdings to the Korean tax agency.

These are two of the 47 accounts undergoing intense audits by the Korean National Tax Service (NTS).

The agency yesterday again reaffirmed its determination to track down offshore tax dodgers.

The agency said 678 individuals and businesses reported having overseas financial accounts of 1 billion won ($892,260) or more as of the end of June. The total amount reported was 22.8 trillion won. This is a 22.8 percent increase compared to a year ago. 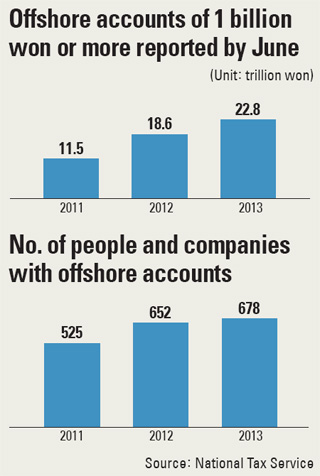 Individuals or companies that have more than 1 billion won in offshore financial accounts were required to report them to the NTS by June 30. The government started the voluntary reporting system in 2011.

The offshore accounts reported were in 123 countries, five more than last year and eight more than in 2011.

Most companies or individuals owning large offshore financial accounts were concentrated south of the Han River.

The largest amount of overseas holdings came from Banpo, where 411.5 billion in accounts were reported, followed by north-of-the-Han Yongsan (276.5 billion won).

The other top areas - Yeoksam, Samseong, Jamsil, Seocho and Gangnam - were all south of the river.

“We will make sure that we penalize those who failed to report their offshore financial accounts,” a tax agency official said.