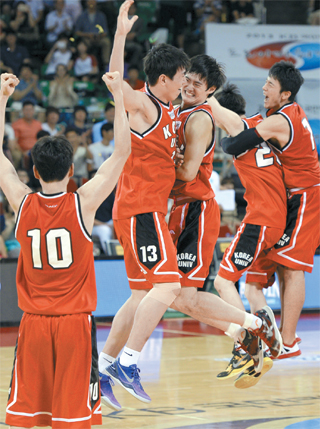 In November, Lee Jong-hyun was the embodiment of confidence that many promising high school players can be. The 2.06-meter (6.8-foot) Kyungbock High School center, the country’s top recruit, who was about to enrol in the prestigious basketball program at Korea University for next spring, unabashedly said that the pro teams at the inaugural pro-am basketball championship would be no better than college teams under the rules that exclude foreign players.

He impressed with 14 points and seven rebounds against the Busan KT Sonicboom during the 2012 KB Pro-Am Basketball Championship, but had to go home early with an 83-73 loss in the first round.

He has the same confidence nine months later, but his air of haughtiness is gone.

Lee, who returned with more maturity from the FIBA Asia Championship, stayed agile to the end, lifting KU over Sangmu, 75-67, in a nail-biting final to win the title of the second edition of the pro-am tournament at Jamsil Students’ Gymnasium, Seoul, yesterday. Lee recorded his fourth double-double, with 21 points and 12 rebounds, and won a nearly unanimous vote as MVP of the tournament.

“I am receiving this as my teammates helped me,” Lee said after the victory. “All of us were united as a team, and gave our best. That’s why we won this good result.”

Tied at 18 in the first quarter, then at 56 in the third, the teams rallied back and forth, but KU stayed focused as Sangmu unraveled in the last two minutes, and outscored them, 19-11, in the fourth quarter to get the victory. Lee chipped in with seven of his 21 points in the fourth quarter, and sophomore Lee Seung-hyun, a 1.97-meter forward, helped with 14 points, 12 rebounds and seven assists. Junior Kim Ji-hoo came off the bench to tie Lee’s game-high 21 points, including five 3-pointers.

Heo Il-young also scored 21 points for Sangmu, but was unable to give the military side its second straight title of the pro-am tourney.

At the KB Pro-Am Basketball Championship, every victory that KU claimed received attention in the tournament’s short history, with Kyung Hee University falling to a late surge by the Phoebus in the quarterfinal. Kyung Hee was the first college to get past the tournament’s round of 16 with a 70-56 win over the Jeonju KCC Egis last week, which KU surpassed by reaching the semifinals with convincing revenge on the Sonicboom, 74-53, on Monday. Kyung Hee, the college champ, lost, 76-73, to the KBL reigning champ Phoebus on Tuesday, and KU picked up where its northeastern college rival left off and beat the four-time KBL champion, 73-72, on Wednesday.

KU received 50 million won ($44, 643) in winning award along with the trophy, but it got more than that: The pro teams will watch its players with more interest than before, starting with the rookie draft for the 2013-14 KBL season that will be held in October.

Many KU players received attention during the tourney, including senior Park Jae-hyun, who contributed 11 points, six rebounds and six assists, but not as much as Lee Jong-hyun. Lee had a double-double in all of the games in the tournament, averaging 22.3 points and 14.0 rebounds in the four games, including yesterday’s final.

But, Lee said that he would not bask in flooding praises. Instead he said he would stick to advice he got from his national team coach, Yoo Jae-hak, who said after a painful loss to KU at the helm of the Phoebus that Lee would have to grind out more, in particular against foreign centers in the professional league.

“I think that this event taught me what I should learn more in the future,” he said.