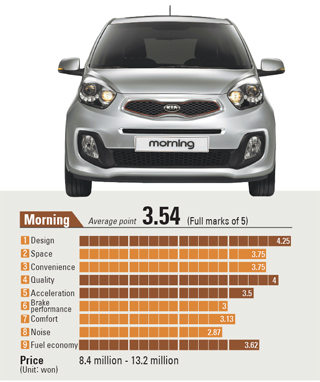 In times of economic deceleration, interest in small cars soars. For those watching their won, small cars cost less to buy and go farther on a tank of gas. And there are other money-saving perks like highway toll discounts.

In the first half of the year, Kia Motors sold more than 46,800 Mornings, making the subcompact Korea’s No. 1 selling car.

It is the first time in 15 years that a subcompact car has topped the list. The last time a subcompact car took the No.1 spot was in a similar economic situation. Then Daewoo Motor’s subcompact Matiz was the best selling in 1998, right after Korea was sucked into one of Asia’s worst-ever financial crises.

Daewoo Motor was later purchased by U.S. automaker General Motors, which rebranded the company to Chevrolet in 2011.

The JoongAng Ilbo invited three automobile columnists and one reporter from a car magazine to thoroughly test the Morning, Ray and Spark and give their opinions.

They evaluated nine categories, including design, space, comfort, driving performance and fuel efficiency. The criteria did not include specifications or government requirements, such as safety features.

With five being a perfect score, the Morning ranked at the top with 3.54 points, followed by the Spark with 3.4 points and the Ray with 3.34 points. 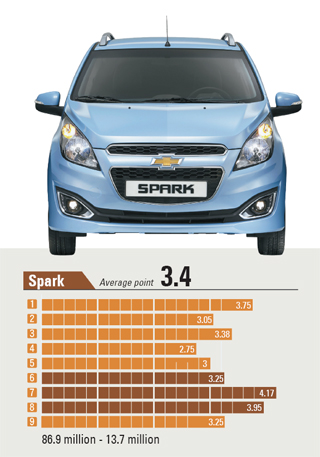 Morning was the winner in four of nine categories, including design. The judges agreed that the quality of the design and interior materials was surprisingly high considering the vehicle’s low cost.

“Morning is prepared with great quality in and out. The design elements were also the most balanced and solid,” said columnist Park Sang-won.

Columnist Kim Ki-bum concurred, saying he was surprised at the high quality the car, especially given its cost.

The subcompact also received high points for its performance. The judges said acceleration was outstanding considering the size of the car.

“The vehicle picks up speed at the appropriate time,” said Jang Jin-taek, reporter for Car Media magazine and a former designer for Kia Motors.

“It has a better aerodynamics and weighs less than the Ray and it has a more powerful engine than the Spark.”

The 2014 Morning, scheduled to be released at the end of this month, will be equipped with an additional airbag, bringing the total number of airbags to seven.

However, the popular Kia subcompact got did not do so well on braking and road noise.

The judges said the brakes were sluggish and the stopping distance was disappointing.

Columnist Na Yun-seok said the noise from the tires and engine, as well as vibration, detracted from its solid performance. 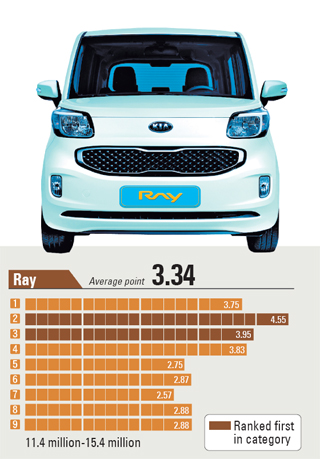 The judges recommended Chevy’s Spark for consumers who want a subcompact car that gets the basics right, including powerful brakes and driving comfort.

The judges said the lower part of the compact vehicle was more solid than that of the other two competitors and the car did not jerk when using the emergency brake.

“Even though this is a subcompact car, it rides as comfortably as if you were sitting in a midsize sedan,” said Jang. “This means that the vehicle has a good frame.”

Jang also stressed that the Spark not only provides an excellent ride but also keeps cabin noise to a minimum.

The vehicle received high reviews for its external design that the judges said expressed the Spark’s unique personality.

“The design of the vehicle is unique and stylish,” said Park Sang-won, another judge.

The Spark, however, received negative reviews for its bare-bones interior design and inefficient use of space.

In contrast to the car’s eye-catching exterior, which seems to have drawn the most attention during the development process, the judges described the inside of the car as plain.

When Chevrolet first introduced the Spark, it stressed that the car’s interior design - including its dashboard - was based on a motorcycle. The target was a young audience.

The Spark also received low marks for its cramped cargo area, which the judges said detracted from the practicality of the car.

“It is hard to find evidence [that the developers] wrapped their minds around trying to find [that extra space] for the back seat as well as the trunk,” said Kim. “Additionally, the trunk is located too high, making it very uncomfortable to use.”

Kia’s Ray received exceptionally high points for its spaciousness and design, which maximize the comfort of the driver and passengers.

The judges said the back seat of the compact car is so spacious it feels like a limousine.

The sliding door on the right side of the vehicle on the passenger seat makes it easy for people to get in and out of the car.

The back seat is adjustable while the front passenger seat in the front can be folded down to increase cargo capacity. As a result, a baby stroller could fit right in without parents breaking a sweat.

“The concept of the vehicle seems like it wasn’t designed simply as a car, but intended to create a moving space,” said Na.

Jang considered the Ray the best-designed box car in the market.

However, the box car received poor reviews on the road because of its bulky dimensions and heavy weight.

“Because the vehicle is tall, it makes it difficult to make turns,” Park Sang-won said. The judges said that because of its size and weight, the car feels like you’re forced to lean forward during braking. In addition, the vehicle’s acceleration and fuel economy both came up short compared to the competition.

Ironically, the passenger seat in the front was uncomfortable because of its folding ability that adds more space to carry items. Because it folds, the passenger can’t recline and must remain seated in an upright position.

This makes it difficult for the person sitting next to the driver to relax when on the road, particularly for a long ride.