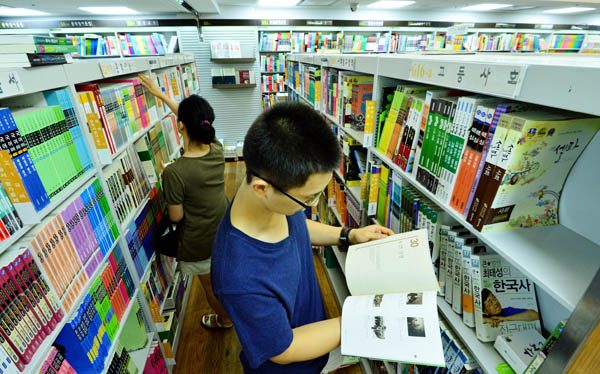 A student looking at a coursebook on Korean history yesterday at Kyobo Bookstore in central Seoul. [NEWSIS]

The controversial new college entrance exam system, which divides several core subjects into two tracks, has not even been taken once yet, but already the Ministry of Education has announced it will reintegrate them.

This fall’s College Scholastic Ability Test is the first time the Korean language, English and math sections have been split into an A test and a more difficult B test. But the ministry said yesterday that it will return to the old unified system, beginning with English in 2015 and then math and Korean language in 2017.

The reversion is aimed at keeping the college entrance system as simple as possible and reducing confusion for parents and college-bound students.

“The idea of offering two versions of the test has drawn criticism from the beginning,” said Education Minister Seo Nam-soo during a press briefing for the draft proposal of the college entrance system. “The new system makes things complicated when conducting mock examinations, as well as for universities and high school teachers.”

But the minister added that the new plan requires public hearings before a final decision is made in October.

The education authority will also step up regulations on universities’ admission systems. Currently, universities have been given leeway in coming up with a wide variety of admission standards they can apply to each year’s students, but from 2015 each school will be limited to a maximum of six admissions standards.

In addition, the education minister raised the possibility of removing the long-established distinction on the CSAT between liberal arts students and general science students.

Presently, high school students must choose either a science track or a liberal arts track. Students from each track are not allowed to select CSAT segments from the other track.

But the ministry is considering eliminating this division and giving all test takers, regardless of their track, the same list of test segments.

If the proposals come into effect, the way high schools operate could change significantly.

“Integrating subjects for both the liberal arts and general science divisions requires a lot of consultations and discussions because it will be accompanied by drastic changes at many levels,” Seo said.

Another major reform would include making history mandatory for all test takers.

General history and modern Korean history currently account for two of the eleven options on the social science version of the CSAT, but under the proposals they would become a single subject all students take, like math and English, starting in 2017.