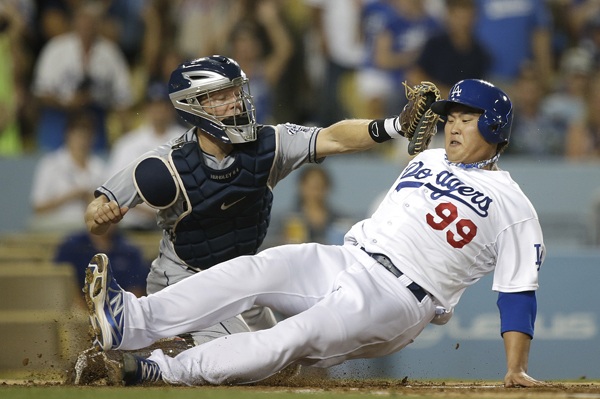 Ryu Hyun-jin of the Los Angeles Dodgers scores on a single by Yasiel Puig as San Diego Padres catcher Nick Hundley misses the throw on Friday in Los Angeles. Ryu’s 13th win is the most among Asian pitchers in MLB this year. [AP/NEWSIS]

LOS ANGELES - The San Diego Padres were unable to contain the Los Angeles Dodgers’ leadoff and cleanup hitters. As a result, Yasiel Puig and Adrian Gonzalez made it a rough night for starter Eric Stults and reliever Anthony Bass.

Puig had four hits and two stolen bases after getting benched in his previous game, and Gonzalez hit a pair of two-run homers to help send the Padres to a 9-2 loss Friday.

After Logan Forsythe’s RBI double in the second inning, the Dodgers responded in the bottom half with two runs on pitcher Ryu Hyun-jin’s two-out RBI double off the base of the left-field fence and a broken-bat single by Puig. Gonzalez increased the margin to 4-1 in the third with an opposite-field drive to left-center that followed Hanley Ramirez’s leadoff double.

“The pitcher got a fastball on a 3-2 count and he barreled up. Then the Gonzo home run was just a bad pitch out over the plate,” Padres manager Bud Black said. “Four runs into the sixth inning is not great, obviously. You want better out of your starter. But I still thought Stults threw better than his pitching line.”

Ryu (13-5) tied Clayton Kershaw and Zack Greinke for the team lead in wins, allowing a run and eight hits in six and one-third innings after his first back-to-back losses in the majors. The Korean left-hander struck out six and walked one.

“He had a great fastball from the first inning and he set the tone,” Ellis said. “He was pumping 93, 94 (mph) that first inning, and usually his MO in the past has been to build up to that as the game goes on. So I think he wanted to make a statement right away because he was pretty discouraged about the way the first inning went against Boston.”

The teams met for the first time since a four-game series at San Diego in June, when the Dodgers lost the first two and fell a season-worst nine and one-half games behind Arizona in the NL West. But they won the next two, triggering a 46-10 stretch that vaulted them a season-best ten and one-half games ahead of the Diamondbacks on Aug. 23, the same margin Los Angeles enjoys with 28 games left.

On Saturday, the Dodgers wrapped up their most successful month since moving to Los Angeles in 1958 with a 2-1 victory over the Padres. The NL West leaders also acquired infielder Michael Young from Philadelphia to bolster a potential playoff run.

Adrian Gonzalez hit a tying single in the seventh inning and pinch-hitter Mark Ellis singled home the go-ahead run in the eighth against the Padres.

The Dodgers also received cash from the Phillies in exchange for minor league left-hander Rob Rasmussen. Young waived his no-trade clause in a deal that was completed 10-15 minutes before the 9 p.m. PDT deadline to make him eligible for the playoffs with the Dodgers, according to general manager Ned Colletti.

“Someone that brings obviously World Series experience, one of the classier people in the game, a winner,’’ Colletti said. “He can play first or third, can come off the bench. Someone we feel has a lot left.”

“We like the guys that we have, but Michael just adds to it,” he said.

Mattingly spoke to Uribe about the deal.

Young batted .276 with eight home runs and 42 RBIs in 126 games with the Phillies this season, including seven hits in his last 10 at-bats before the trade. He has made 101 starts at third base and 17 at first.

“He makes us stronger,” Mattingly said.

The Rangers paid a portion of Young’s salary to Philadelphia, which is passing it on to the Dodgers, Colletti said.