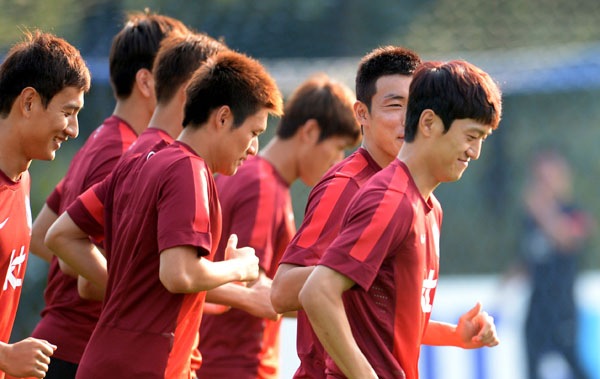 Hong Myung-bo will lead Korea against Croatia tomorrow in a return match that is shaping up as a gauge of how good his team really is compared to that of his predecessor, Choi Kang-hee.

After a 4-1 thrashing of Haiti on Friday, the Hong squad will seek revenge for a humiliating 4-0 loss in a tune-up match in February in London during Korea’s World Cup qualifying campaign.

The loss completed Choi’s four-game winless streak - including a 2-1 loss in another friendly match with Australia in November - that fueled growing public criticism and eventually led to the coach stepping down even after managing to get a direct berth to the Brazil World Cup thanks to a goal difference over Uzbekistan in June.

Failure to perform better against Croatia could add to the doubts about Hong, who became the first coach since 2000 to fail to win his first four matches at the helm of the Korean national team.

The winless streak ended only when Korea beat 72nd-place Haiti at Incheon Football Stadium, thanks to a double by Son Heung-min and penalty goals by Koo Ja-cheol and Lee Keun-ho.

Kervens Belfort scored the only goal for the Caribbean team, and Yves Desmarets fouling out early in the second half made it more difficult for Haiti to rally .

Son, a striker for Bayer Leverkusen, put Korea on the scoreboard in the 20th minute, only the second goal under the leadership of Hong.

Belfort answered with an equalizer in the closing minutes before halftime.

Lee Chung-yong of the Bolton Wanderers gave Korea a chance to retake the lead when he induced a penalty foul by Mechack Jerome, which Koo of VfL Wolfsburg sent into the net in the 49th minute.

Haiti players protested the penalty call and got more emotional when Desmarets, a defender, was sent out on his second yellow card.

Lee once again drew a penalty foul from the unraveling Haiti team, which Lee Keun-ho sent into the net in the 59th minute. Son finished the rout with a 72nd-minute goal.

Still, it was hardly the kind of victory Korean fans expected.

“We earned two goals on penalty and an opponent fouled out. We could have played a better game,” Hong said in a post-match press conference.

Croatia will be a much tougher team to beat, although several of its key players like Mario Mandzukic of Bayern Munich and Luka Modric of Real Madrid, will sit out the match.

Croatia is ranked eighth by FIFA, while Korea languishes in 56th place.

In February, Korea lost to Croatia even after Choi mobilized key resources, many of them remaining pillars of the Hong squad.

“Croatia is ahead of us in every aspect,” said defender Kwak Tae-hwi. “I think how we deal with a strong team will help us improve our competitiveness at the World Cup.”

“The players gained confidence through the victory [against Haiti]. That will be manifested in the Croatia match,” he said. “It is true that Croatia players have more experience than our players. But we can learn many things from them. It will be a good match in preparing for the Brazil World Cup.”