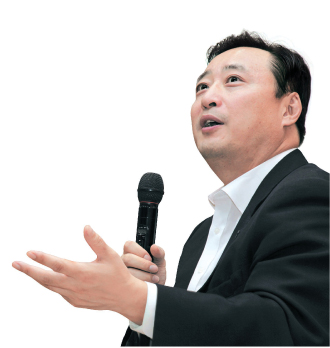 While other brokerage firms are cutting back on employees as profits dwindle in a flat market, Korea Investment Holdings is hiring.

The driving force behind the job expansion is 50-year-old Vice Chairman Kim Nam-koo, who has made personal appearances at Korea Investment Holdings’ recruitment drives for the past decade to explain exactly what kind of talent the company needs.

He says the perfect time to hire is when others are not.

“When do you buy stock?” Kim asked during a recruitment tour Friday at Seoul National University. “When the prices are cheap. It’s the same with people. That way you can recruit exceptional talents.”

Kim is known to shy away from public events and focus on managing the brokerage group. However, the only regular public appearance he makes is the annual recruitment presentations he has led since 2003.

The biggest change this year is that all brokerages - big and small - have been struggling in the recent economic climate. As a result, many are not filling existing job openings, much less hiring for new positions.

Since Tuesday, the brokerage has held recruitment presentations at eight universities in Seoul.

“Among the five major brokerage firms we are the only company hiring and are not affiliated with a conglomerate or a banking financial group,” Kim said. “If we hire when others are doing the same, they will choose our competitors over us.”

The reason Korea Investment and Securities is able to hold a recruitment presentation is because of its relatively good performance.

While many of the major brokerages, including Woori, Samsung, Hyundai and KDB Daewoo, have seen operating profit fall 60 percent to 100 percent, Korea Investment and Securities’ operating profit grew 5 percent year-on-year, from April to June.

He stressed that performance was largely due to the dedication of his employees.

“The brokerage industry is not a place where you can make money just by coming up with a hit product or exceptional idea,” Kim said. “Employees have to work really hard without breaks, even on weekends.

“We are continuing to hire talent when others are restructuring because it is the power of our talent that helps us, with less capital and lower brand recognition, to compete shoulder-to-shoulder with the big firms.”

On this day, Kim told students who were interested in turning in their resumes that the company doesn’t want people who dream of becoming public servants or bankers.

When a student asked how he would deal with the relatively high dependency on retail transactions, which the student call a major problem in the industry, Kim said he has no plans to change.

“Compared to other brokerage firms, Korea Investment and Securities has a relatively low retail share of 35 to 40 percent. We have no plans to reduce our retail sales while increasing profits from other sectors,” Kim said. “We do want to diversify our profit sources and one way to do that is expand overseas.”

He explained that the company entered the Vietnamese market in 2007 and acquired a securities firm in 2010. He said the company targeted Vietnam instead of China because the world’s top brokerage giants were already doing well there, while Vietnam had plenty of untapped potential.

“It is same with products. We will specialize in the fields we can serve best.”