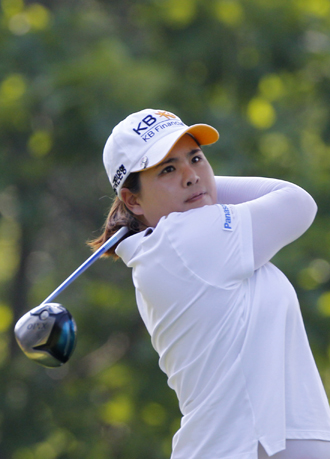 Park In-bee, the world’s No.1 female golfer, is set to make her second attempt to win her fourth major title this season.

The 25-year-old, who has won Kraft Nabisco, Wegmans LPGA and the U.S. Open, will participate in the 2013 Evian Championship that tees off on Thursday local time in Haute-Savoie, France. The event, co-hosted by the LPGA and Ladies European Tour (LET), has been promoted to a major championship this year.

The total prize money is $3.2 million, which is tied with the U.S. Open as the richest event among the five major championships.

In early August, Park made her first attempt to win her fourth major this season - but failed as she tied for 42nd in the Ricoh Women’s British Open.

If she wins the Evian, she will become the first golfer in the world, male or female, to win four majors in a single year, a feat many Korean media outlets call a “calendar Grand Slam.”

No female golfer has accomplished such a feat, although American golfer Bobby Jones won four major titles in 1930, but two of the major titles - the U.S. Amateur and British Amateur - were amateur level events at the time.

Starting with the Evian, she earned her third career title in the Sime Darby LPGA Malaysia in October.

The focus is now on whether she can improve her physical conditioning in the Evian. She withdrew from the Safeway Classic on Aug. 29 due to symptoms of enteritis and failed to place in the top 10 in four events after winning the U.S. Open in July.

In the British Open, Park finished tied for 42nd, well short of her bid to win her fourth straight major. Park closed out the tournament with a 6-over 78 on Sunday at the par-72 Old Course at St. Andrews, 14 shots behind the champion, Stacy Lewis of the United States. Park ended her tournament at 6-over 294.

Park has earned about $2.1 million this season, and leads the player of the year race with 281 points, well ahead of Lewis, who has 173. Because the Evian awards 60 points to the winner, and $487,500 in prize money, she might continue the tough competition with Lewis if she wins the event.

In the Evian, 120 players, including other Korean golf sensations such as Choi Na-yeon, 26, Shin Ji-yai, 25, Ryu So-yeon, 23, and Seo Hee-kyung, 27 will compete for the title. Lydia Ko, 16, who won the Canadian Women’s Open in August will shoot for the championship as well.