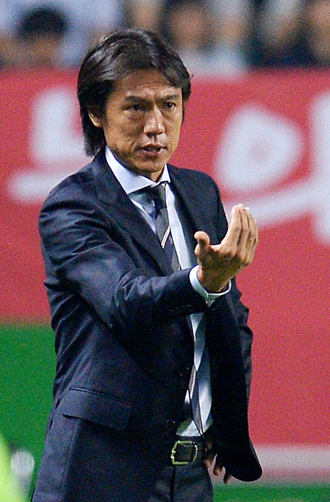 With another national team loss for coach Hong Myung-bo and the World Cup in Brazil looming ever closer, is he ready to call up overlooked offensive players Park Chu-young and Ki Sung-yueng?

The football coach will head to London this week after a 2-1 loss to Croatia on Tuesday, in which Korea once again revealed its persistent weakness - lack of a scoring touch. During his trip to the United Kingdom, Hong will see the Koreans playing in the English Premier League and the Football League.

Many of the Korean players in the United Kingdom, such as Lee Chung-yong of Bolton Wanderers, Ji Dong-won of Sunderland, Kim Bo-kyung of Cardiff City and Yun Suk-young of Queens Park Rangers, were called up in Korea’s two friendly matches this month, including in a 4-1 win over Haiti on Sept. 6.

But Park Chu-young of Arsenal and Ki Sung-yueng of Sunderland have yet to join Hong’s team since he took over the senior side in June.

The absence of the two stars was painfully felt in the Croatia match, when Korea failed to score until Lee Keun-ho’s face-saving goal during stoppage time.

Korea had 11 shots against the eighth-ranked European powerhouse, but only two on target.

Croatia coach Igor Stimac said after the Tuesday’s match at Jeonju World Cup Stadium that Korea needs more precision, with the humbling advice that modern football does not allow teams to blow their scoring chances.

Hong’s choices of strikers so far - Kim Shin-wook of Ulsan Hyundai, Kim Dong-sub of Seongnam Chunma, Seo Dong-hyun of Jeju United and Ji - have been largely ineffective, as the former Olympic coach has built a record of two losses, three draws and just one win in his first six matches.

Some players expressed hope that the return of Park, considered by many to be Korea’s best scorer, could turn things around.

“Of course, it is up to him [Park] to decide,” Koo Ja-cheol cautiously said. “Also, what coach Hong will decide is important.”

But, Koo added, “Chu-young is experienced and has excellent individual ability. Personally, I wish that he would come back to the national team and play for his country.”

Arsenal added Park to its 25-member roster on Sept. 5, enabling him to play in the English Premier League season through January.

Ki moved to Sunderland on a season-long loan from Swansea City, in part because of advice from Hong: More playing time is the most important way to ensure a place with the national team in the Brazil World Cup.

Korea will play Brazil and Mali next month.