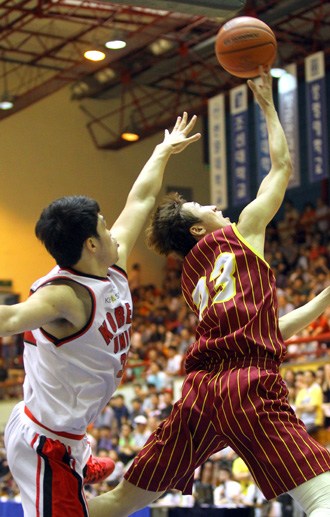 Lee Jong-hyun had a double-double and Korea University rallied from behind to defeat Kyung Hee University, 74-71, to claim its maiden KB college title yesterday.

He received 10 of 20 MVP votes cast by basketball journalists, beating KU junior Lee Seung-hyun, who also had a double-double but ended up with seven votes. Lee Seung-hyun scored 19 points and grabbed 12 rebounds.

Kim Min-goo, who received as much spotlight as Lee Jong-hyun during the pro-am event last month, scored a game-high 29 points, but fell short of leading Kyung Hee to its third straight crown. Doo Kyung-min chipped in with 18 points for Kyung Hee.

It is the first KB college title for KU since the competition was launched in 2011. Kyung Hee won the first two editions. Kyung Hee opened the best-of-three championship with a 76-70 win against its northeastern Seoul college rival, but Korea won the second game, 59-53.

In the third game, Kyun Hee built a comfortable lead in the first half, but KU quickly caught up in the fourth. Lee Jong-hyun converted an alley-oop pass from Park Jae-hyun into a dunk to make it 70-69 with 1:47 left in the fourth. Trailing 74-71 in the closing seconds, Kim’s 3-pointer attempt missed the rim before Kyung Hee picked up the offensive rebound, but Lee Jong-hyun blocked a 3-pointer attempt by Kim Young-hyun before the final buzzer.